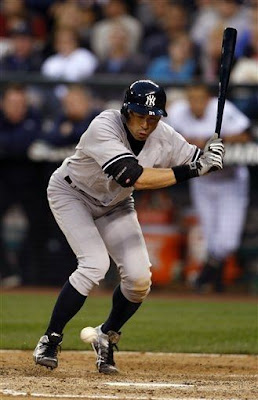 - Garcia: 7.1 IP, 5 H, 3 ER, 0 BB, 8 K, L.  Freddy deserved a better fate last night.  Only 2 of the 5 hits he allowed were well hit, and 1 of them never left the infield.  He actually had his slider and splitter working well last night, and mixed in his fastball well for strikes once he started to find his groove in the middle innings.  A tough loss to take if you're Freddy.

- Joe: Second time in 3 games I've put Joe down here, so that tells you what kind of job he's doing lately.  The decision to let Ibanez hit was stupid, the decision to pull Freddy might have been stupid, but the decision to intentionally walk Jesus Montero with 2 outs was definitely stupid.  It was a knee-jerk reaction to Ackley stealing second base and the wrong reaction.  You can't put more runners on base in that situation when you're down in a close game.

The Yankees will soldier on without their fallen Horse, and probably start working the phones for some trade possibilities, so fire up your trade proposal machines, people!  The final game of this series is this afternoon, with Ivan Nova getting the start for New York.
Posted by Unknown at 7:21 AM