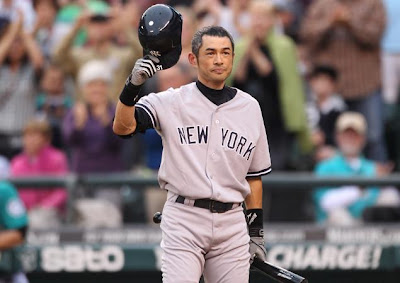 No one should need to be reminded that this is not the "perennially chasing the single-season hits record" version of Ichiro from the mid-2000s.  He's not going to come in and hit .340 and he's not going to bat leadoff.  He's 38 years old, he's been on the decline for the last 3 years or so, and his bat speed his decreased.  But he's also not just a warm body up there in a Yankee uniform.  He can still do some things very well, namely run the bases with speed (16/18 in SB attempts) and play Gold Glove-caliber defense (25.9 UZR/150), and those things happen to be what Brett Gardner did well too.  With Girardi stating last night that the plan is the play Ichiro primarily in the left field, Ichiro can very easily be the missing link in those departments and allow Raul Ibanez and Andruw Jones to move back to more full-time DH roles.

And while his bat is not nearly what it used to be (.261/.288/.352, .281 wOBA in 427 PA this season), there is reason to be optimistic that things could pick up for Ichiro with the change of location.  Playing in Safeco Field is never an ideal environment for hitters, and even as he has declined Ichiro's home/road splits reflect that.  His slash line jumps to .296/.313/.399 on the road this season, an encouraging sign now that he'll spend his all time hitting away from Seattle.  In 68 career PA at the new Yankee Stadium his slash is .333/.353/.492, an even more encouraging sign that his new home park is well suited for his swing and hitting approach, small sample sizes be damned.

Per my TYA compadre Matt Imbrogno and our group email chain discussing the deal yesterday, Ichiro's park adjusted slash line for Yankee Stadium this season is .287/.317/.387, which is nothing special but also better than his current numbers.  As Matt said, "It's not great, but when base hits are your only offensive contribution, .287 >>> .261."  Matt also pointed out that Ichiro's BABIP (.297) and xBABIP (.349) are drastically different in his Ichiro-centric post at TYA this morning, another reason to be optimistic that this change of scenery could lead to a positive spike in production.  And although there's no way to statistically measure it, the whole mental aspect of going from a bottom-dweller to the best team in the AL is something to be considered.  Ichiro sounded very excited to be on a team contending for a division and World Series title, and who knows how that may revitalize him?

At the end of the day, this is exactly the type of move the Yankees needed to make.  Their rotation is good enough to win a championship, as is their lineup and bullpen, they just needed to add one more stable outfield piece to replace what they've been missing without Gardner.  They got just that in Ichiro and got it for a mid-level Triple-A prospect with a low ceiling (as much as it pains me to say that about my boy D.J.), an absolute nobody, and a bargain-bin cheap $2.25 million price tag.  At best, all the factors mentioned above combine to allow Ichiro to be a slightly more effective version of Gardner (.290/.320/.420) and give the Yankees that cyclical feel back to their lineup.  At worst, he provides elite defense and gives them some speed on the bases to make them a bit more flexible offensively.  It's a great move by the Yanks any way you cut it.
Posted by Unknown at 12:37 PM