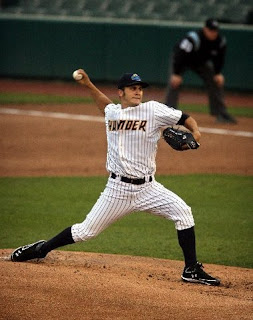 Much like their NBA counterparts, the Thunder have started to heat up over the past month, and they've done it with a big-time group effort from the offense.  Cody Johnson is still the major source of the lineup's firepower, and his all-or-nothing approach still seems to be serving him well.  He's hitting .262/.343/.574 with 15 HR, 34 RBI, 70 K, and 22 BB on the season, a very Adam Dunn-ish line if I've ever seen one.  It's still too early to tell if he's going to develop some patience and pitch recognition skills, but the raw power is most certainly there.

The group effort thing really starts to come into play after Johnson.  Second baseman Kevin Mahoney has put up a respectable .290/.387/.448 line in 145 PA, Zoilo Almonte and David Adams are back in the lineup and working on getting back into the groove of things, and Abe Almonte, Luke Murton, and Melky Mesa all have OPS values north of .700.  There hasn't been much that stands out in terms of elite-level prospect production, but everybody is doing their part and contributing to winning baseball.  Keep an eye on SS Jose Pirela.  He's just come off the DL recently and has 10 H, 6 R, and 6 RBI in his last 10 games.

Moving to the pitching staff, it continues to be Brett Marshall that paces the group and he has done a very good job covering for the injuries and lack of big-time performances from the rest of the staff.  He's pitched to a 2.44/4.15 ERA/FIP split, the FIP number affected by a higher-than-average HR rate, and has lowered his BB/9 to 2.85.  What is concerning is Marshall's big dip in strikeouts this season.  His K/9 is currently just 5.02 on the year and a legitimate question mark moving forward.  He's improved his command, and is providing length in his starts while limiting baserunners.  Now it's time to see some of the stuff come back.  Vidal Nuno and Mikey O'Brien have each been promoted to help Marshall shoulder the load.  Nuno threw 7 scoreless innings his last time out on Friday.

At the highest level of the Yankee system, the pitching is still the major concern.  Manny Banuelos came off the DL, threw 3 brilliant outings (1 ER, 15 K, 0 BB, in 14.2 IP) before struggling on May 18th and hitting the DL again with elbow soreness.  Dellin Betances continues to show no improvement in his command or ability to repeat his mechanics (5.30/5.82, 46 BB to 45 K), and Adam Warren has had a really rough go up until his 7 scoreless innings of work last night (92 combined H and BB in 62.1 IP with only 47 K).  The bullpen arms continue to be the staff's strength, but as of yet we haven't seen anybody from the Cedeno/Whitley/Delcarmen group get called up, and Pat Venditte is out with a torn labrum.

At the plate, Steve Pearce, as he did in April, was the lineup's most consistent threat until he was traded this past week.  Ronnier Mustelier has continued his hot hitting since being promoted from Double-A (.321/.350/.518, .385 wOBA in 120 PA at Triple-A) and could be knocking on the door of consideration for an injury replacement at the Major League level if needed, and Corban Joseph was recently moved up as well.  The younger bulk of the lineup, however, has not been producing.  Brandon Laird has a .616 OPS and .286 wOBA in 224 PA, Ramiro Pena and Colin Curtis even worse, and Eduardo Nunez didn't hit much after being sent down from the Yankees and getting injured.  Austin Romine is still on the shelf with his back injury, and not expected to be back until July.

There have already been some promotions and roster moves throughout the system, mainly due to the high number of injuries suffered by Yankee pitching this season.  But with the draft and MiL All Star breaks coming up soon, we should start to see some more movement in the near future.  Guys like Tyler Austin, Gary Sanchez, Rob Segedin, and Marshall could all be due for a bump up, and it will be interesting to see who ends up where in the next month or so.
Posted by Unknown at 12:53 PM