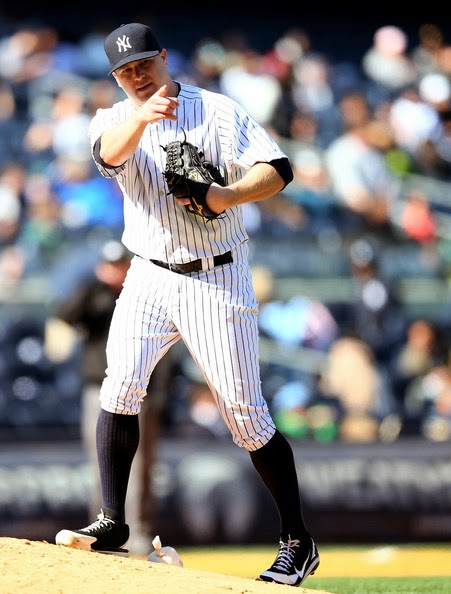 Based on his preference for defined roles and the fact that Kelley was his handpicked setup man at the start of the season, I don't see Joe keeping Betances and Warren where they are and having Kelley work middle relief.  He should slot back into his regular job tonight and could see immediate action in it, as both Betances and Warren worked an inning last night.  They've been on heavy innings count paces for the last month or so and the cracks in their armor from the heavy workload might be starting to show.  Betances has had some command issues lately, giving up runs twice in his last 4 appearances that were aided by walks and wild pitches.  Warren has given up 5 ER on 13 H and 3 BB over his last 9 appearances, and his recent K rate isn't what it was earlier in May.

Bumping Warren and Betances down to primary middle relief duty should help limit how often Joe uses them and give them the extra rest they probably need.  If his starter gives him 6 innings, Joe can use one or the other to pitch the 7th ahead of Kelley.  If the starter doesn't, something that happens often with Nuno, Phelps, and Whitley in the rotation, Joe can use Betances as the mid-inning fireman to end threats and hand a clean inning over to whoever's up next.  On days when Tanaka is pitching and goes 7+, they might both be able to get a day off.

Joe can also help Matt Thornton out by having an extra middle relief arm available to handcuff to him.  Thornton has given up more hits than you'd like to see from a guy in a LOOGY role, and when that's happened he's gotten himself into trouble by having to face right-handed hitters.  If Joe has Betances or Warren available in situations that call for Thornton, he can feel better about using Thornton in a lefty-lefty matchup and lifting him immediately for a righty if he doesn't get the job done.

Most importantly, Kelley's return and the resulting bump down the ladder for Warren and Betances means fewer innings available for the soft underbelly of the lower-level Yankee middle relief.  Be it Aceves, Claiborne, Daley, or whoever, none of them have been very good and they've been especially bad in close-game situations where Joe has had to use them.  More of those innings are going to go to Kelley, Betances, and Warren now, and the garbage time guys can be saved for actual garbage time.

All that's left is the team formally announcing Kelley's activation later today and making the corresponding roster move.  When that happens, the Yankee bullpen will basically be back to the original format Joe had in mind at the start of the season.  He'll have his closer (D-Rob), his setup man (Kelley), his top middle relievers (Warren, Betances), his LOOGY (Thornton), and his innings eaters (Daley, Ramirez, or LeBlanc).  Seeing how the bullpen has performed without its closer and primary setup man for most of the season, it'll be good to see what they're capable of when they're at full strength.
Posted by Unknown at 1:00 PM