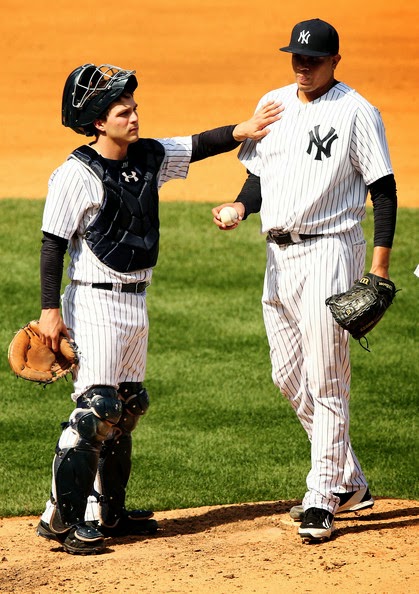 While he did flourish in the role, Betances' lack of experience in it combined with his wildly inconsistent command and tendency to fall apart when things started going wrong made him far from a sure thing as a reliable Major League reliever.  Joe took him out of camp mostly because he did earn it with a strong performance but partially because this year was the final year for Betances to show something.  He had already gotten a multitude of chances and he was down to his last one.  Fast forward 6 weeks and here Betances is, thriving in a regular middle relief role and leading the Yankee pitching staff with a 0.88 FIP.

And that's not all.  Betances also has a sterling 1.72 ERA and has struck out 28 batters in 15.2 IP while giving up only 9 hits.  He isn't getting beaten by good hitters and he isn't getting hamstrung by bad luck.  Dellin Betances is straight up dominating MLB and finally showing the type of all-around pitching game that the Yankee front office hoped he would put together.  He's bringing the heat, with his fastball averaging 95.2 MPH, and his knuckle curveball is one of the most unhittable pitches in baseball (16.5% whiff rate).  Although it might not look like it based on his 11.1% BB rate, he actually has made strides to improve his command.  His walks have mostly come in bunches, as he has 2 in 3 different games, but he's only walked a batter in 4 of his 12 appearances and hasn't walked one in his last 3.

Beyond the great numbers and always-critical command/mechanical improvements, it's the way Betances is approaching the game that truly shows his maturation as a pitcher.  Once a dedicated fastball/curveball guy, Betances is actually working mostly off his knuckle curve this year (42.9% usage).  He's cut his 4-seamer usage down to 36.9% and mixed in more cutters (20.2%) to keep hitters honest.  From his previous cups of coffee and from working with a more experienced group of pitchers and coaches in Major League camp, it appears Betances has learned that it's not as simple as throwing the ball by guys.  You have to know when to pick your spots and how to set pitches up to make them more effective.

To that point, check out when Betances is throwing his curveballs.  According to PITCHf/x, he's thrown 121 total so far this year.  He's thrown 24 of them on the first pitch of an at-bat, 17 in an 0-1 count, 7 in a 1-0 count, and 11 in a 1-1 count.  That's 59 of the 121 (48.76%), almost half the curveballs he's thrown coming early in the count.  Betances isn't taking the simple route of getting ahead with the fastball to set up the curveball with 2 strikes.  He's throwing the curveball early, getting it over for strikes, getting the opposing hitters thinking, and then giving himself options for the rest of the at-bat.  He's still throwing the curve a lot with 2 strikes, as he should, but he's not being overly predictable with how and when he uses it.  Want another example?  He's thrown the curveball 3 of the 4 times that he's been in a 3-0 count this season and thrown it for a show-me strike every time.  There's no chance in hell he could have done that 2 years ago.

I hadn't quite given up on Betances before the start of this season, but I'd be lying if I said I thought he'd be pitching this well.  As a big guy who battled his mechanics and struggled to throw strikes for so long, it seemed like he was never going to get there.  But kudos to the Yankees for moving him to the bullpen and setting him up for success and kudos to Betances for continuing to work, making the changes to get better, and making the most out of the opportunity he was given this season.  He's the sneaky best reliever in the Yankee 'pen right now, he's quickly becoming one of the nastiest relievers in the AL, and I have a feeling he's going to start moving up Joe's ladder of trust very soon.
Posted by Unknown at 11:30 AM