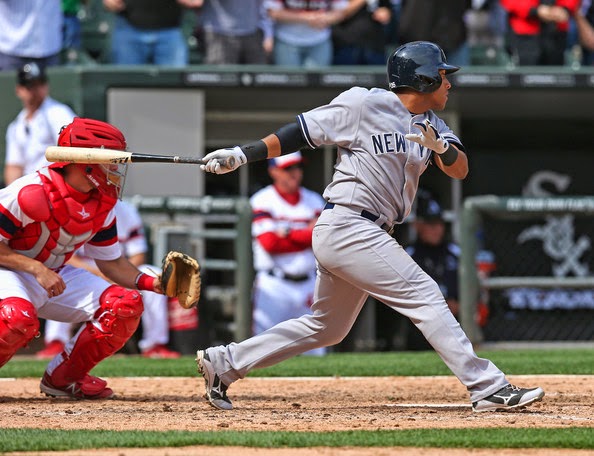 Solarte's spray chart for his last 6 games shows a high concentration of groundball outs.  This is an extension of what's been a month-long trend for him.  His GB rate in May is 53.7%, almost 20% higher than his 34.4% April GB rate, while his FB rate has dropped from 46.9% to 25.6%.  When you're hitting more balls on the ground and not seeing a lot of pitches, your production is naturally going to go down.

The good news here is that there are multiple reasons to believe this is nothing major.  The 9 pitches in 4 PA last night is un-Solarte-like from what we've seen so far, but in the 25 total PA he's had in his last 6 games he's seen 95 pitches.  That's 3.8 pitches/PA, which is right in line with his season average.  He also hasn't started striking out more (only 2 in the 6 games), so it doesn't appear as though he's getting burned by a poor change in approach.

If anything, Solarte may be falling victim to the same swing mechanic problems that are behind Jacoby Ellsbury's recent slump.  He hasn't changed his approach, he isn't expanding his strike zone, and as far as we know he isn't hurt.  Solarte went through a similar mini-slump from the end of April into early May and he worked himself out of it while the team played .500 ball during that stretch.  They've done the same over the last 6 games (3-3), so I don't think there should be too much concern.  Just give Solate some time to correct whatever's wrong and hit his way out of it.
Posted by Unknown at 10:39 AM