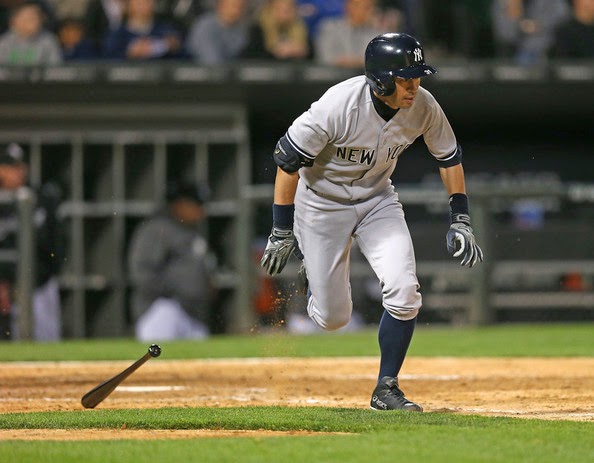 
Look no further than Brian Roberts' game-winning hit with the bases loaded in the 12th yesterday as an example.  That was his 3rd hit in 6 extra inning plate appearances this season and he has 4 hits, 4 runs scored, and 2 RBI in his last 3 games.  Ichiro Suzuki has 6 hits, 6 walks, and 4 R scored in the 9 games he's played since taking over for Beltran as the starting right fielder.  Nothing has gone for extra bases and the overall 9-game performance has actually hurt his season slash line, but he's created plenty of scoring opportunities by getting on base.

It doesn't stop there.  Brendan Ryan has 3 hits, 2 R scored, and 1 RBI in limited playing time over the last week.  His RBI single in the 12th yesterday provided a key insurance run for D-Rob, However ass-backwards the logic is in using him this way, he's also come up with a big defensive play or 2 at first base.  John Ryan Murphy has 3 hits in his last 4 games and always seems to do something positive with the bat when he's in the lineup.  And Zoilo Almonte even popped a home run in one of his first games of the season after being called up to take Beltran's roster spot.

Whoever is hitting in the 7-9 spots and wherever they're playing in the field, the Yankees are getting something helpful from that bottom third of the order almost every day.  It's helped mask the issues in the middle of their lineup and provided a little extra help to guys like Teix and Gardner who have been hitting well at the top.  The current bench 4some (Murphy, Ryan, Almonte, and Kelly Johnson) might not look that appetizing, and I'm sure Joe would rather have better hitters than Roberts and Ichiro, but they've been coming up big as a group lately and have been key cogs in a few of these recent victories.
Posted by Unknown at 9:35 AM