The Most Important News Of The Offseason So Far

(Originally posted at IIATMS/TYA.  The Photoshop is too good not to re-post)


Cashman expects to deal directly with Jay Z during Cano negotiations. He met with agents for Beltran, McCann, Choo and others while here.
— Andy McCullough (@McCulloughSL) November 13, 2013

I know sometimes I write things here that may come across as a bit ridiculous, and I'm the first to admit that there are instances where I intentionally add a dash or 2 of hyperbole to my posts to spark a reaction and discussion in the comment section.  But believe me when I tell you that I'm being 100% honest when I say this.  The idea of Brian Cashman and Jay-Z working together directly, 1-on-1, to negotiate Cano's new deal is the most fantastically entertaining possibility in the history of MLB hot stove season and if you don't agree then you have no sense of humor.

Just picture it.  Cash sitting there in his khakis and team polo shirt, Jay in a $10,000 suit and a pair of designer sunglasses with Memphis Bleek and Beanie Siegel flanking him, one of those giant bottles of Spades champagne on ice and a few Cuban cigars on standby to celebrate the new deal when it's reached.  Straight up Swag City.

I almost don't even care what happens with McCann, Beltran, or Choo if Cash and Hova are going to be going mano-a-mano on the Cano contract.  That's must-see TV and if the MLB Network found a way to set up cameras and mics in the negotiating room and turned it into a PPV event, I'd have no choice but to cave and finally plunk down money for an MLB TV package.  Who knows, maybe Cash and Jay would hit it off, discover they have a lot in common, and this negotiation could be the start of a fruitful  business relationship where the Jigga Man brings more big name free agents to the Yankees' doorstep.  That would be pretty sweet. 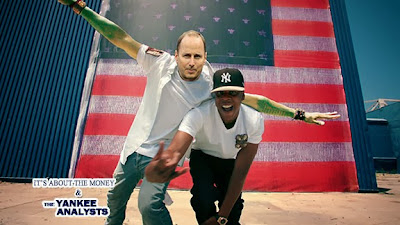 (Shout out to Tamar Chalker from IIATMS/TYA for the outstanding P-shop work)
Posted by Unknown at 9:50 AM