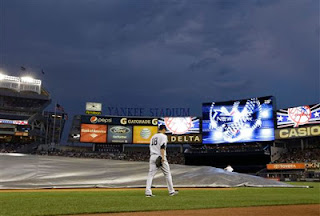 - Kuroda: 5.1 IP, 8 H, 3 ER, 0 BB, 5 K.  Kuroda was much more hittable in those middle innings and never really got in a groove with his stuff, despite the 5 strikeouts and the fact that he didn't walk anybody.  He needed to be spectacular last night and he wasn't.

The Yanks will stay put at home and welcome Nick Swisher and the Cleveland Indians to town tonight.  We'll see if weather is a factor again.  Andy Pettitte is scheduled to come off the DL to make the start tonight and he'll need to be good against Cleveland ace Justin Masterson.
Posted by Unknown at 2:53 AM

First - I'll agree - the Yankees looked horrible. BUT - you can't complain about a lack of patience, when the pitcher is throwing strikes.

I wanted to scream at Hafner - he was obviously following orders - the end result was that he stood and watched 3 pitches go by for strikes. afaik, that is a strikeout - end result no different than Robby flailing at gopher balls. (which, to his credit, he didn't do last night.)

The team did a better job of laying off bad pitches - they just couldn't lay good wood on the strikes Bucholz was throwing.