Do You Hear That, Phil? 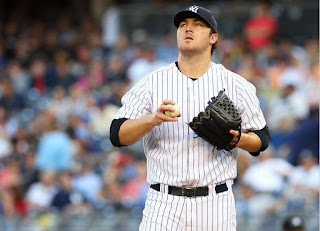 Do you?  You should listen to it a little closer.  That's the sound of Michael Pineda coming.  That's the sound of your rotation spot disappearing in about a month, and possibly a nice chunk of your upcoming free agent money with it.  Take a look around, buddy.  You're the weak link in the rotation, and the truth is you have been since the minute Ivan got DL'd.  You're sitting with a 5.09/4.43/4.41 split now, with just as many bad starts than good this season after another Phil Hughes 101 clinic last night- missing in the strike zone with fastballs, inconsistency with the offspeed stuff, no ability at all to put hitters away with 2 strikes.  It's all just getting old, dude.  You're waking up today coming off another stinker and Pineda is pitching again tonight down in Tampa.

And guess what?  This time the Yankees won't shuffle guys around and roll out the red carpet for you in the bullpen.  They don't need to do that this time.  Things are just fine in the 'pen.  Maybe you'll get put on the phantom DL with more shoulder fatigue.  Maybe you'll get sent down to Triple-A to hang out with Ivan.  Maybe you will get sent out to the bullpen, to be Adam Warren's caddy and D-Rob's sock washer.  It doesn't really matter anymore.  What matters is that your act has gotten tired and Pineda is on his way.  He's coming and he's not coming just to be a placeholder for Andy's back.  He's coming for your job.
Posted by Unknown at 10:21 AM