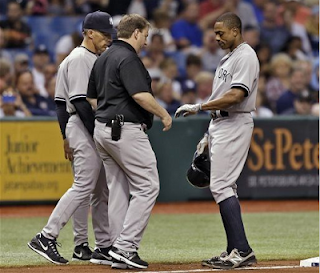 
For starters, the loss of Granderson puts the lineup right back in the shortened, weak position it was in just a few weeks ago.  The Yankees have had trouble scoring runs consistently this month even with C-Grand in the lineup, and the return of Ichiro Suzuki as an everyday part of the lineup in place of Granderson will do little to help that problem.  Ichiro is down to .238/.276/.327 this season (.257 wOBA), looking more like he's done with each passing game, and the recalled Brennan Boesch (.209/.244/.419 in 45 PA) hasn't been much better.  After having the luxury of moving Granderson around in the lineup to strengthen it as needed, Joe will have to go back to stacking a top-heavy 1-5 batting order and having a very weak bottom part with the collection of Ichiro, Boesch, Nix/Brignac, and Romine/Stewart.

There's also the diminished impact of Mark Teixeira's return to consider.  Teix is on schedule to start his rehab assignment next Tuesday, and if all goes well and he isn't showing any signs of pain in his wrist he could be back in the lineup in a few weeks.  A lineup including Teix and C-Grand together along with the other working pieces would have been easily the best one the Yanks have put on the field to date.  Now with Granderson back out it's almost as if the Yankees won't gain anything from Teix's return.  He'll take Lyle Overbay's spot, and despite Mike Axisa's suggestion earlier today that the Yanks try Overbay in the outfield, I think Lyle is going to left out in the cold and the lineup is going to be left without 2 productive bats.

If there is good news in this, it's that Granderson will come back from this injury and likely will be back faster than he was from the broken forearm.  With the injury being another broken bone, there's little concern about there being any lingering effects once Curtis does come back and the only thing he'll have to worry about is getting at-bats and getting his timing back at the plate.  It's still a frustrating setback, however, and one that leaves any Yankee fan pleading with whatever higher power he or she believes in to cut the Bombers some slack.  It's another obstacle to overcome, and the Yankees are going to need somebody to step up and produce to make it happen.
Posted by Unknown at 2:47 PM