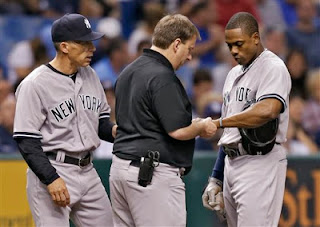 - Phelps: 7.2 IP, 6 H, 4 ER, 0 BB, 3 K.  The 4 ER make the start look worse than it was.  The reality is that Phelps was very good again.  He was much more efficient than we've seen in previous starts - he wasn't even up to 100 pitches in the 8th inning - and the no walks is a big sign that he was commanding his stuff much better.  Hope Nova gets comfortable on the bullpen bench if and when he comes back.

- Vernon Wells: 0-5, 8 LOB.  Vernon, that batting line.  Woof!  Good thing he had big sticks like Nix and Stewart there to pick him up.

Afternoon game today and it should be an interesting matchup to say the least.  Tampa sends power lefty Matt Moore to the mound while New York counters with finesse lefty Vidal Nuno.
Posted by Unknown at 6:29 AM