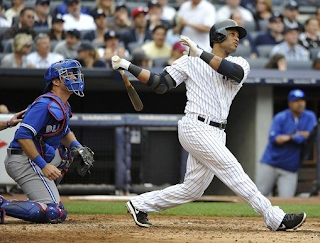 - Phelps: 7 IP, 6 H, 1 ER, 3 BB, 8 K.  He's flying under the radar with how well Kuroda is pitching, how poorly Hughes is, and how much of a concern Andy's health continues to be, and in doing so Phelps has suddenly become the unofficial #3 starter on this staff.  The guy continues to quietly impress.

I'd say this was a nice recovery from the series loss to Seattle, no?  The Yanks go for the sweep tomorrow afternoon with CC Sabathia on the mound.  R.A. Dickey gets the start for the Jays.
Posted by Unknown at 3:58 PM