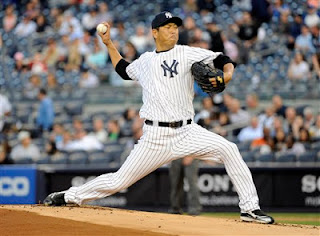 - Kuroda: 8 IP, 2 H, 0 R, 1 BB, 5 K.  Is it me or does the start to this season for Kuroda mirror his start to last season?  Rotation's a little banged up, CC's not pitching quite as well as some people think he should, and here's Kuroda sneaky dominating and sneaky leading the staff.

- Vernon Wells: 0-4, 2 K, 1 LOB.  Normally you notice when Cano and Wells put up a combined 0-fer.  Luckily last night was the exception to that rule.

Game two of this series is this afternoon.  David Phelps gets the start for the Yankees and Brandon Morrow for the Jays.
Posted by Unknown at 6:44 AM

Cano has been struggling at the plate. He's swinging at a lot of pitches outside the zone. Hopefully he becomes more patient and understands that the hitters behind him have been stepping up and he can take a walk if it's given to him...