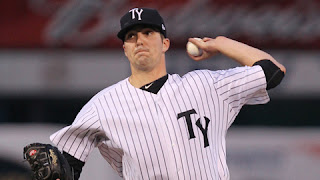 Tracy's 2012 season was a tale of 2 unequal halves.  The first half includes the 11 starts he made through July 16th, which included 9 starts of 2 ER allowed or fewer and 7 straight to open the season.  During this 2-month stretch, Tracy gave up just 16 ER in 62.0 IP (2.32 ERA) while striking out 42 and walking 28.  After July 16th, it seemed like the competition started to catch up to Tracy as he allowed 20 ER in 42.0 IP over his final 8 starts (4.29 ERA), including his 1 Triple-A start.  One positive was that Tracy's BB rate over his final 8 starts was much lower than in his first 11 (3.00 BB/9 compared to 4.06), with a similar K rate in both sample sizes, and his season ERA/FIP slash of 3.18/3.63 in his 18 High-A starts is very good for a first-year starter.  But the overall body of work does suggest that Tracy has plenty of room to refine his game and become a better pitcher.

The first thing he needs to do is improve his command.  42 walks in 104.0 IP is a lot, and sharper command on all 3 of his pitches (fastball, curveball, changeup) would help cut that number down.  Tracy has already demonstrated plus command of his low-to-mid 90s fastball, and improved command of his offspeed stuff should also help boost his K rate, which was admittedly pretty weak.  Right now he doesn't possess a go-to out pitch with either of his offspeed offerings, and as he starts to advance to higher levels of the Minors, hitters are going to be more likely to take advantage of that.  It's all about repetition and learning to harness stuff for a pitcher with as little starter experience as Tracy, and working with a big frame there's reason to be optimistic that both his command and stuff can trend upward in 2013.

What Tracy does have working against him is his age.  He turned 24 last November, and to date has only made 1 start above the High-A level.  He's likely to get bumped up to be part of a potentially strong Double-A Trenton rotation with guys like Jose Ramirez, Zach Nuding, and Nik Turley at some point this season, and working with Turley and a new coaching staff could help speed up his development.  The Yankees clearly like him, and there's clearly a path for him to the show as a big lefty if he can start to put the pieces together.

Tracy is already working from a strong base of having 3 usable pitches and knowing how to get outs, and the progress he's made in less than 2 years of working exclusively as a starting pitcher is incredibly encouraging.  The next step for him in 2013 is turning those pitches into swing-and-miss pitches and throwing them with more consistency to avoid contact.  If he can do that, don't be surprised to see him cracking top organizational prospect lists as soon as next year.
Posted by Unknown at 4:00 PM