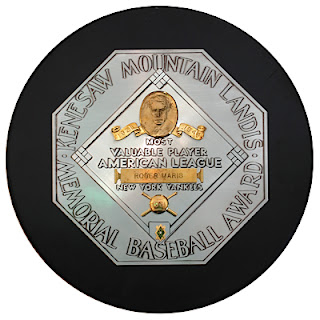 I have a confession.  I lied to you all last week when I said the 2012 Season Predictions Review post was the end of the 2012 AB4AR Season Review series.  I forgot about the awards.  MLB is giving out all their big season awards this week, with the Yankees coming up dry in all the ones already announced and looking like they only have a top 5 candidate at best in Robinson Cano for the AL MVP award today.  So being the kind, caring, selfless, generous person I am, I'm going to use this time to hand out my version of the end-of-season awards for the 2012 Yankee season.

Know that this was a difficult decision and a tireless process to determine the winners.  All those who do win an award will be getting one of the free fictional AB4AR t-shirts that are still in the developmental stage and everyone is invited to a dinner at a location to be determined to honor all the winners.  Without further ado, the 2012 AB4AR award winners...

With all due respect to the Derek Jeter Rebirth Tour, Robinson Cano is still the best and clearly the most valuable player on the Yankee team.  Played in every regular season game except 1, every postseason game, set new career highs in HR, SLG, ISO, wOBA, wRC+, BB rate, and fWAR, scored 100+ runs, would have driven in 100+ if it wasn't for some freak shifts in his RISP batting line, and played Gold Glove defense at second again.  It's a no-brainer.

Kuroda's durability and consistency gets him the nod over CC Sabathia, whose peripheral stats were a little better across the board, by the narrowest of margins.  Save for a few shaky starts early, Kuroda was the most reliable pitcher on the staff this year, and set some new career best marks for himself in the process, which is no small feat as a 37-year-old pitcher making the shift from NL to AL East.  He could have and should have won 20+ games if his offense would have backed him up a little, and he turned in some of his best outings of the year during CC's 2 DL stints.  That's clutch.

Rookie of the Year- David Phelps

He didn't have much competition after Jesus Montero was traded away, but Phelps was a very pleasant surprise this season in a year where the Yankees didn't get much from their under-30 crowd.  Phelps took every challenge thrown his way in stride, pitching short outings, long outings, making spot starts as needed, and being effective in every role.

Coach of the Year- Joe Girardi

Obviously Joe would win if this was a true Manager of the Year award, so to make it fair the entire coaching staff was eligible.  In the end, it was still Joe who did the best job this season.  He constantly had to juggle injuries and age when filling out his lineup card, and had to get creative to overcome losses in his rotation and bullpen.  I'm always more critical of Joe than others, but I thought he did an excellent job overall this year navigating this team to another division title, and to be as focused and professional as he was in the postseason while dealing with his father's death speaks to the type of person and type of manager he is.

He was never going to beat Cano for MVP, but The Captain deserves something for the historic season he had.  There's just no reason why a shortstop his age should be starting All Star Games and winning Silver Slugger Awards, and yet Jeter pulled it off with relative ease like it was still the early 2000s.  Jeter proved that his strong finish to 2011 was no fluke, and with the sour way his 2012 season ended, it deserves recognition for how special it was.

Tough choice here, since there was more regression on this team than improvement, but coming off a disaster of a 2011 season I'll give Phil some props here for rebounding nicely in 2012 and keeping himself a relevant part of this team.  He stayed healthy throughout the season, reached new career best marks in starts, IP, and K and BB rates as a starter.

40 years old, hadn't played competitive baseball in over a year, came back on a MiL contract, and pitched better than he had in years.  I know I wasn't expecting that, and I know a lot of other people weren't either.  If it wasn't for goddamn Casey Kotchman and his goddamn liner up the middle, Pettitte probably would have been the real AL Comeback Player.

I can deal with A-Rod really starting to fall off and break down in his late 30s.  I can't deal with Teix doing the same thing in his early 30s.  The 4th straight year of declining OBP and wOBA and first sub-30 HR/100 RBI season since his rookie year is bad enough, but now health is starting to become a problem for Teix too.  Whether it was his whooping cough, wrist, or calf, he was almost never at 100% physically this season, and it makes me nervous that those constant ailments are going to become the standard moving forward.

You can't have an executive award when the only real competitor is Cash, so I'll give him a "Best" and "Worst" award to critque his season.  Ibanez, as unappetizing as he was at the time, turned out to be somewhat of a savior as an everyday lineup option for LF and DH when injuries struck, and a straight up life saver in September and October with some of the clutch HR he hit.  The shots against Bahhston and Baltimore alone made his contract worth it.

Hard to make a case for any other move when this trade resulted in the loss of the team's best position prospect since Jeter and the young, low-cost, right-handed power bat they desperately need in exchange for a starting pitcher who didn't throw 1 regular season pitch and could end up being permanent damaged goods for the next 5 years.

Congratulations to all the winners, or condolences if you won in the negative categories.
Posted by Unknown at 1:47 PM

If Jete was not our MVP, a questionnable conclusion for which I demand a recount, he deserves the recognition as the best durned leadoff man since Rickey.