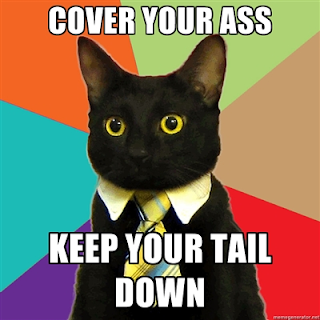 While the NY tabloids and the endless stream of talking heads at ESPN want to brainwash you into thinking that everything wrong that happened with the Yankees this postseason was Alex Rodriguez's fault, the fact remains that, like the team's successes, it was a true group effort to accomplish getting swept by the Detroit Tigers.  It's been a somewhat subliminal staging of The Blame Game taking place in the coverage of the Yanks' ALCS struggles, even within the blogosphere.  So being the fair, reasonable, even-keeled blogger that I am, I decided to take it upon myself to definitively state for everyone how the blame for what happened should be divvied up.  It took many hours of brain wracking to come up with this, so I hope you appreciate it.  Because I did it for you, Yankee fans.

They weren't making the plays on the field or the calls in the dugout, but don't think the non-Cashman sect of the front office is blameless here.  They insisted on handing out Alex Rodriguez's gargantuan contract, just like they insisted on signing Rafael Soriano.  Those 2 moves, combined with this year's insistence on getting below the luxury tax threshold in 2014 combined to put the team in a no-man's land of financial stability that crippled Cash's ability to really address the team's needs at the trade deadline.

Yes, he was working under the unofficial budget restraints set for him by Hank and Hal and Randy, but Cash could have been a little more creative and outside-the-box thinking in his construction of the Yankee bench.  The problems with the Yankees' lineup regulars becoming older, injured, and too one-dimensional were only further exploited when the bench featured a group of older players even more one-dimensional than the ones they were replacing.  That bit them in this series and was a byproduct of Cash sticking a little too strictly too his formula.

As good a job as Joe did in the ALDS, he couldn't replicate that in the ALCS.  His failure to ever use David Robertson properly in any of the 4 games of the series cost the team at least 4 runs, and his failure to use Soriano hardly at all may have cost 1.  The lineup moves that he made, while I supported them, didn't help to ease the tension being caused by the offense's struggles, and I'm sure there was some damage done to some egos and reputations.  Worst of all was the showing the team put forth in the final game.  Nobody really looked or played like they felt they had a chance, and that lack of enthusiasm reflects on Joe.

I threw the question out there earlier in the week, and the more I thought about it the more I think I do want to point the finger at K-Long a little more.  He's the one who made these guys what they were this season; he's the one who preached pulling the ball on the inside to swing for the short porch.  He's the one who continued to speak about the need to make adjustments after each game only to have us watch the same guys come out with the same approaches and the same shitty results in the next game.  He may be a coach that the players like, but in this series he wasn't a coach who helped the players in any way.

At the end of the day, after all the talk about the people who built the team, shaped the team, and made the calls during the games, it comes down to the guys with the gloves and bats on and in their hands being professionals and doing their jobs.  And the Yankee players didn't do that in this series.  They played shoddy defense against one of the more shoddy defensive teams in baseball, and gave a dangerous offense extra chances to score.  They didn't flash any of their trademark offensive power or patience, and thoroughly embarrassed themselves by not being able to even make a simple adjustment against a pretty obvious pitching strategy, let alone generate any kind of positive results.  They showed very little emotion, concern, or even regard for what was happening around them, and looked and sounded like a beaten, broken bunch when they had to answer for what had happened.

Blame it on injuries, age, luck, the emotional loss of watching Jeter go down, or whatever you want.  But the fact of the matter is that Robinson Cano, Curtis Granderson, Nick Swisher, Alex Rodriguez, Eric Chavez, Jayson Nix, and Russell Martin didn't get it done.  And the handful of guys who did hit didn't do it in a big enough fashion to make even the slightest difference in outcome.  The team's best pitcher pitched like crap in a must-win game, and the B- and C-level relievers pitched like C- and D-level relievers.  The players didn't play well, and when that happens you aren't going to win a league championship series.  That's the bottom line.

There.  Glad we got that all clear.
Posted by Unknown at 3:40 PM

Aside from the need to scientifically ascribe the blame, I would add mention that the media storm over Alex may have resulted in a failure to man third optimally. Eric, who made a couple uncharacteristic errors and failed to hit, may have been hampered by a bad back. He looked to be moving awkwardly. Because of what had been decided, and then said publicly, an incapacitated man had to fill in for an able-bodied Alex.

Bigger, but even less scientifically determinable, is the question of where did the mojo go? Team morale, hoped to "win one for Jeter," flopped. They shoulda been bunting, or otherwise changing tactics; Robbie and Swish shoulda been busting nuts to get to first.

Jeter's leadership should not be underestimated, if his absense could not be overcome. I'm thinking the Alex distraction was poorly chosen by management, and Joe and Brian should have spent their effort drumming up esprit de corps.