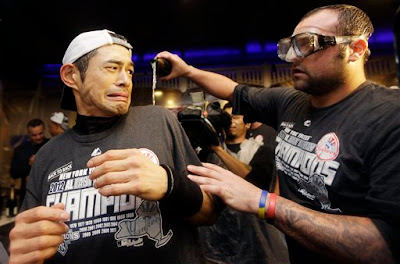 Since there was a postseason atmosphere surrounding last night's game and we're now transitioning into the postseason, I figured it was time to dust off the "Thoughts & Afterthoughts" series to get into true playoff mode.  Now that I have the guaranteed ability to watch each and every game on TV, my ability to analyze and comment on everything is greatly enhanced and I usually expand said commentary to more than just the game itself.  If you're a long-time reader you know how this works; if you're new to the AB4AR crew, here's your chance to get familiar.  The game recaps from here on out will be in this free-flowing format, with the standard game recap awards coming at the end.  Enjoy.

- Why doesn't the entire Yankee Stadium crowd get involved in the 1st-inning roll call?  I've always wondered that.  Why do the bleacher creatures get to monopolize that?  I think it would be a lot cooler to have everybody in the park chanting "Rob-in-son!"  Assuming, of course, that there were more than 15 people in The Stadium in the top of the 1st who weren't already in the bleachers.

- I'd be lying if I said I wasn't concerned watching Kuroda in the top of the 1st.  He wasn't hitting the corner with his slider, and the one that he left up in the zone was the ball Cody Ross hit for the RBI single.

- I'd also be lying if I said the "here we go again" thought didn't cross my mind after the offense went down on 6 pitches in the bottom of the 1st.  That's never a good strategy against a pitcher as nibbly as Matsuzaka and it was frustrating to see the Yankees take that approach.

- Great foreshadowing/jinx by ESPN showing the Sawx bullpen get active in the bottom of the 2nd and then cutting right back to the next pitch just in time to see C-Grand hit his 3-run homer.  Every now and then they do something pro-Yankee, even when they don't mean to, and I always imagine an executive in his office in Bristol slamming his drink down on his desk when he sees that happen.

- Cano's home run in the bottom of the 3rd was just silly.  That's the only way to describe it.  It wasn't a pitch that should have been hit that far and he barely even swung hard enough to hit a ball that far.  When you're good you're good.

- Solid point by Terry Francona after the Cano HR when he pointed out that Cano is essentially protecting the slumping, powerless A-Rod right now.  Pitchers want no part of Cano, and that's going to extend into the ALDS.  A-Rod should see plenty of pitches to hit.

- Now that I've praised ESPN enough, time to bash them for their shameless self-promotion and failure to stay focused on the game.  In the first 4 innings the broadcast team spent significant chunks of time talking about the Texas Rangers, the recent USC-Stanford game, and the upcoming "Monday Night Football" schedule.  Come on, guys!  There's a Yanks-Sawx game with the AL East title hanging in the balance going on right in front of you.  Leave the shill stuff for "SportsCenter."

- Huge AB for Kuroda when he got James Loney out in the 4th.  He threw him a lot of good pitches down in the zone and finally got one that Loney rolled over on for the DP ball.  That to me was where Kuroda really started to find his game.

- I don't want to get too deep into this, because fellow TYA writer EJ Fagan will cover it later today, but I couldn't believe how many "experts" on ESPN were plugging Miguel Cabrera for the MVP because of his Triple Crown.  They were talking about WAR like it was a completely made-up concept.  Mike Trout is a better player than Miguel Cabrera and he was more valuable than Cabrera this year.  Period.

- The ESPN guys help-jinxed him out of it, but A-Rod's 83-plate appearance XBH-less streak was very surprising, very depressing, and very telling about where he's falling to with the rest of this contract.

- Cano's 2nd HR in the 5th just wasn't even fair.  That was like watching him in the 2011 HR Derby all over again.  Just cool, calm, collected, and swinging free.  I especially loved the slo-mo replay showing him spitting sunflower seeds mid-swing like it was nothing.

- Dan Shulman's intro to C-Grand's 3rd AB of the game- "Granderson has homered and struck out." Sounds about right.

- That 4th-inning AB against Loney was the start of it, and after that Kuroda did a great job of keeping all his pitches down in the zone; the slider, the 2-seamer, the splitter, it was all working.  If he can have that kind of command of his offspeed stuff moving forward, the Yankee rotation could be in really good shape.

- Once again I was disappointed with the crowd last night.  A lot of chants got started up, but they never caught any steam and died down pretty quickly.  Have Yankee fans just become that spoiled?

- More Cano smooveness in the 6th with his wink to David Ortiz after he just missed another 1st-pitch HR and fouled the ball off.  That's cocky, really cocky, and I like it.

- Can Pedro Ciriaco just go the fuck away?  Seriously, that guy made a KILLING against the Yankees this season, and his bloop double to right was just the latest BABIP kick in the balls.  That guy is legit terrible, and he probably earned himself a roster spot for next year solely off his performance against the Yankees.

- I still don't get why pitchers try to challenge C-Grand with fastballs over the plate.  It's real simple, if you let him extend his hands, you're screwed.  His homer in the 7th was people's exhibit Q of that.

- He isn't quite as hot as he was weeks back, but Ichiro still looks good hitting 2nd.  If he can continue to produce from the 2-spot, this lineup suddenly becomes very deep again.  C-Grand hitting 7th is murder, and a 20-HR Russell Martin hitting 9th is no cakewalk for opposing pitchers either.

- I actually laughed out loud when Andruw Jones flew out to the warning track in the 8th.  So fitting for how he fell off the face of the earth in the second half.  Screw him at this point, I really hope he doesn't make the postseason roster.

- They kept their foot on the gas for as long as they had to, and it was nice to see Joe get Melky Mesa and Francisco Cervelli into the game late, and to let Jeter finish up the game as manager.

- Somebody really needs to talk to Joe about his nickname problem.  I listened to a bit of his postgame presser; "Booney," "Chavy," "Nixy."  Really, Joe?  Nixy?  Come on, man,  You're not even trying anymore.

- The 245 HR for the season was a new Yankee record.  The last 3 times they have set a new team record for HR in a single season, they won the World Series twice.  That's a good omen.

- There was a postgame report of Raul Ibanez leaving the team celebration early to be with his wife who was going into labor.  Helluva couple days for that guy!
Posted by Unknown at 10:41 AM