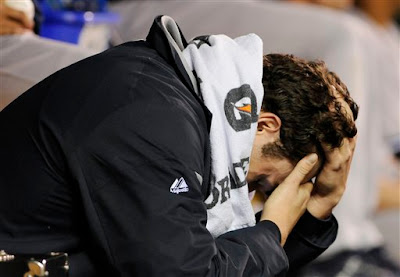 - The lifeless corpse of Andruw Jones managed to stumble into a homer in the 9th to make it interesting, but the Yanks still ended up on the losing end.  Gotta be a real bad taste in everybody's mouth after the way this one went down.

- Joe: It's easy to sound like Monday morning quarterbacking knowing how things played out after Logan took the ball, but this loss falls on Joe's decision.  Hughes had owned Span the previous 3 times he faced him, didn't look like he was tiring, deserved to get that last out and get out of the game with a chance to win, and was a better option than a probably-gassed Logan.  Joe and his stupid binder took that away, plain and simple.

- A-Rod: 0-4, 2 K, 2 LOB.  Was gracious enough to take Robbie's spot as designated non-hitter while Robbie took the chance to get on base a few times.

Strange to say that a game against a lowly Twins team in late September is a must-win, but this one is a no-doubter.  The Yankees can't afford a series loss after last night's debacle, not with the division race so tight.  They send CC Sabathia to the hill this afternoon against Sam Deduno.
Posted by Unknown at 7:17 AM