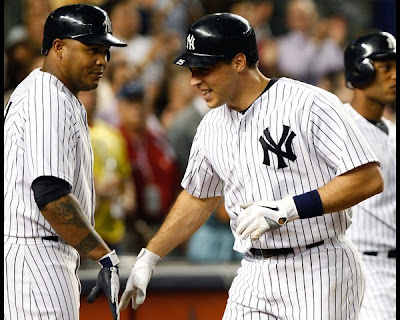 About 5 weeks ago, Andruw Jones was starting to percolate.  He was fresh off a 4-HR, 6-RBI binge against the Fraud Sawx in the final 3 games before the All Star break, he had his season batting line up to .244/.326/.535, and he had people talking about how he was primed to come out and have a big second half of the season just like he did in 2011.  Since coming out the other side of the ASB, that break out hasn't exactly come to form, despite the fact that Joe tried to ride the hot hand and gave Jones far more playing time and plate appearances in July than he had gotten in any of the months prior.  What gives?

Jones has gone 7-51 (.137 BA) since the ASB, with just 1 HR, 6 RBI, and 19 K/5 BB.  His tripleslash is down to .213/.297/.455, he hasn't driven in a run in the month of August, and has driven in only 2 since July 23rd.  That date is where Jones' nosedive really started to accelerate, and it may or may not be coincidental that 7/23 was the same day the Yankees traded for Ichiro Suzuki.  With Ichiro added to the mix, even when Swish missed that bit of time, Jones has seen his PT cut way back and that could be the reason for his failure to catch fire so far in the second half.  As an older TTO hitter, Jones needs regular ABs to stay locked in and he simply hasn't been getting that in the last 3 weeks.  He only has 22 PA this month, and that lack of regular playing time makes it hard to get out of a slump.

My expectation was that the Ichiro trade would do nothing to cut down on Jones' playing time as Ichiro would assume Raul Ibanez's role in the L/R LF platoon and move Ibanez back to full-time DH.  That hasn't happened, though, as Joe seems to prefer Ichiro's speed in the lineup and better outfield defense over the right-handed thump that Jones can bring in the platoon matchup game.

Jones probably isn't doing himself any favors by not mashing lefties at all this season when he does get the chance.  He's actually working with a surprising reverse platoon split this year where he's hit RHP (.342 wOBA) much better than LHP (.314) in half the PA.  He's clearly lost a step in the outfield, and cannot seriously be considered a better defensive option than any of the 3 regular outfielders, so if Jones isn't going to be the designated lefty murderer at the plate that he's expected to be, there's not a lot of benefit to putting him in the lineup.

It's unfortunate for both parties actually.  Ichiro is next to useless against lefties and shortens the lineup in instances where he's penciled in against a southpaw.  But Jones isn't doing enough to justify getting those at-bats.  In a perfect world, Jones would be the everyday option against lefties and Ichiro would be the late-game defensive replacement, but Jones needs to start to turn things around first.  He might not want to do it, but Joe might have to give Andruw some more games and more chances to pull himself out of this slump to start to maximize his new left field platoon.
Posted by Unknown at 12:39 PM