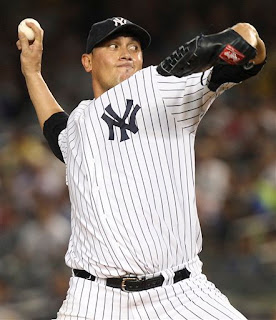 - But the rest of the Texas lineup was stifled by Freddy's slider, and the trio of Boone Logan, D-Rob, and Sour Puss held them to 2.1 hitless innings of relief to save the win.

- Garcia: 6.2 IP, 4 H, 2 ER, 1 BB, 6 K, W.  Take away Hamilton and his solo shots and the rest of the Texas lineup managed to put just 3 baserunners on against Garcia and do nothing with them.  It's not Derek Lowe 4-inning save impressive or Hiroki Kuroda CG 2-hit shutout impressive, but that's pretty damn impressive.

- Martin: 0-3, 1 BB, 1 K, 7 LOB.  There could have been a little more breathing room for Freddy and the 'pen if Martin had come through just once in his chances with RISP.

I'm legitimately shocked and incredibly excited about it, but the Yankees are going for a sweep of the Rangers this afternoon.  They've outpitched them so far in this series, they've out-hit them by a slight margin, which is just enough when you're getting the kind of pitching they are, and they can run them out of town with another W today.  Ivan Nova looks to keep building off his last great start against Derek Holland.
Posted by Unknown at 9:36 AM