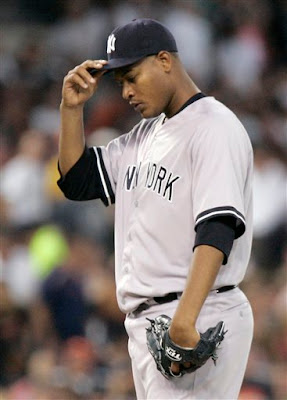 - Verlander worked through the 8th, Jose Valverde handled the 9th, and that was all she wrote.  The Yankees didn't score an earned run in the game.

- Chavez: 3-4, 2 2B, 1 R, 1 LOB.  The only guy to really put multiple good at-bats and good contact up against Verlander.  And the ankle looked good, which is a positive sign.

- Nova: 5.1 IP, 11 H, 7 ER, 0 BB, 5 K.  Nova only threw 68 pitches in 5+ innings, so it was clear that he was either hitting his spots or missing really badly, and save for the 3 guys he struck out after the Fielder HR it was more or less missing really badly all day, erry day.  He can't locate anything right now, and his body language when things start to go bad indicates that he doesn't have the confidence or mental wherewithal to make the necessary changes and work through it.  Very disheartening to watch Nova pitch right now.

- Everybody Else: 1-24, 1 R, 13 K, 17 LOB.  Give Verlander props for being on his A-game.  The guy isn't the defending AL Cy Young winner and MVP for nothing.  But give the Yankee lineup their negative props (nops?) for not putting up a fight.  Special shout-out to C-Grand and Teix, who combined to go 0-9 with 6 K and look like helpless children against Verlander.

1 down, 3 to go.  Phil Hughes returns to the site of his first career complete game victory tonight, this time against Rick Porcello instead of Verlander.  Hughes (13 ER, 11 BB, 32 K in 49.0 IP over his last 7 starts) has been pitching well lately while Porcello has struggled (18 ER, 39 H in 29 IP in his last 5).  Should be a favorable matchup for New York, at least on paper.
Posted by Unknown at 6:38 AM