A Much Needed "Pick Me Up"

It's been a rough couple of days for your faithful Captain.  My car died on me on Sunday and I had to fork over a hundo to have it towed to a repair shop, it was a completely shitty day at the office yesterday, I couldn't come up with anything good to write about, and to top things off I'm going to be out a couple grand to replace the entire engine in my dead car.  The rain delay before the game last night wasn't helping matters either, as their was nothing else on TV worth watching.  But by the time SportsCenter came on, I got the little boost I needed and it had nothing to do with the NFL lockout being over. 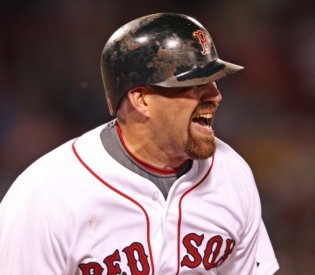 (Courtesy of The Bahhston Herald)
Look at that.  Isn't it glorious?  That's Kevin Youkilis wincing in pain after he hurt his hamstring running to first base late in the Sawx' loss to KC last night.  And it was at that moment that I saw him wince and limp up the baseline on the replay that I knew things were going to be OK.  That injury to Youkilis' hamstring was God's way of saying "It's OK, Brad.  I know you've had a tough day or 2, but this will make you feel better."  And it did.  It doesn't matter if Youk misses any time or not.  The fact that was hurt, in pain, and I got to see it was all I needed.  I would pay a premium to watch Kevin Youkilis limp around in pain if I could.

So the pep is back in my step and I'm ready to go for a better day of blogging than yesterday's 0-fer.  Thanks to Kevin Youkilis and his gimpy hamstring.
Posted by Unknown at 7:52 AM