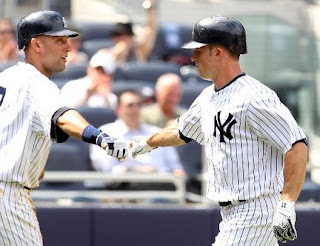 (You can't lose with either guy hitting #1 right now.  Courtesy of The Star-Ledger)
Since the beginning of Spring Training, the debate has raged on over who should be the Yankees' leadoff hitter.  First it was Brett Gardner, then Derek Jeter, then Gardner again, then Jeter again, and so on and so forth.  Over the last couple weeks, however, it's become apparent that the Yankees actually have 2 very good leadoff options in both of these guys.

Gardner has been remarkably consistent and downright good ever since the month of April ended.  And after a bit of a rough patch early in July, he has continued his consistent production, currently putting up a .333/.400/.417 line in 72 July ABs, not too far off his spectacular June (.317/.404/.463 in 82 ABs).  He's also a perfect 12-12 in SB attempts for the month, and that, combined with his continued solid walk rate and high pitches/AB makes him a prototypical leadoff threat that wouldn't even be considered for the bottom of the order on any other team.

But a funny thing has happened that has muddied the waters a bit this month when it comes to the Gardner vs. Jeter debate.  Ever since he's returned from the DL, Derek Jeter has rediscovered his spark at the plate.  I touched on that point very early on in his return, brought it up again after his storybook 5-5 3,000th hit day, and now I'll mention it again as he has continued to be productive.  For the month of July, Jeter is hitting .324/.385/.521 in 71 ABs, raising his season line to a more respectable .273/.337/.366.  Of his 23 hits so far, 9 of them have gone for extra bases.  To put that into perspective, Jeter only had 12 XBH in the first 3 months of the season COMBINED.

Jeter's resurgence can best be explained by this blurb from last night's LoHud postgame wrap-up:

"... Jeter said it’s not so much driving the ball to right field that tells him he’s hitting better lately, it’s more the pitches that he’s choosing to take and the pitches he’s choosing to attack. “I can tell if I’m staying back, taking pitches and swinging at good pitches,” he said. “I feel as though I’ve been doing that for the last few weeks so I’m happy with where I am right now.”

That sounds much more like the Jeter we all know and love, and that approach is reflected in Jeter's July swing stats.  His LD rate is a season high 19.6% this month, indicative of a hitter who is seeing the ball better and taking good swings at hittable pitches.  His BB rate is also the highest it has been all year this month at 9.0%.  The improvements in Jeter's selection at the plate explain the better results he's had, and make him just as viable a candidate to lead off as Gardner right now.

With both guys swinging the bat well and the offense as a whole still missing a key cog in A-Rod, it makes sense to me to platoon both Jeter and Gardner at leadoff depending on the pitching matchup to maximize the value of their current hot streaks.  The numbers would support this theory, as Jeter has murdered lefties this year to the tune of a .936 OPS and .414 wOBA (compared to just .621 and .270 vs. righties), and Gardner sports a .788 OPS and .350 wOBA against righties vs. .738 and .338 against lefties.  I would even want to keep Jeter near the top of the order against righties to take advantage of his current hot streak more and lengthen the lineup a bit.  My 2 lineups right now would look like this:

The problem is whether or not Joe wants to tinker with the lineup to try to get the most out of his current hot hitters at the top and help try to bridge the gap to A-Rod's return.  But given the inconsistency his boys have shown lately, I'd rather have the problem of multiple guys hitting well that deserve to hit leadoff than neither of them hitting well.

** UPDATE- 3:29PM- I completely forgot to include Eric Chavez in the lineup versions.  Idiot.  Obviously he would be a more attractive choice than Nunez and probably more than Jorge given the way he's swung the bat this month. **
Posted by Unknown at 1:00 PM