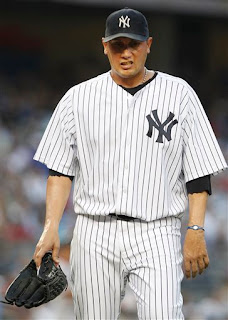 You look around the AL and you don't see many teams with lineups half as good as that of Bahhston, or the Yankees for that matter.  As long as he stays healthy, we can expect to get the same marginal service from Freddy against the rest of the league with a good start thrown in here and there, and with the Yankee offense that should be enough to be successful.  But if this is the best he can do against Bahhston, then Joe might want to think about juggling the rotation to keep him out of it the next time they come to town instead of Nova.
Posted by Unknown at 7:52 AM