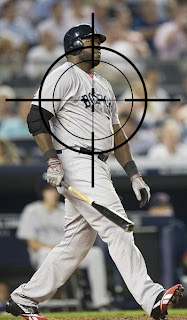 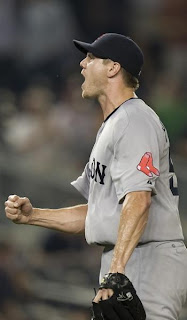 (Photos courtesy of Anthony J. Causi at The Post.  Crosshair Photoshop work by Swanny Duckson.  Douchebaggery courtesy of Fraud Sawx Nation.)
Posted by Unknown at 10:54 AM

First off, I can't believe we didn't retaliate for the Lester hit batsmen. I don't think he even got a warning. It was basically the same pitch hitting both batters in the same spot--the umpire has got to come out and say "you can't control that pitch. If you use that pitch again, you're out." And then Big Poopi. Please plunk him. And isn't his style using the 'roids anyway?

I'll subscribe to the theory that Lester was a bit off and neither Teix nor Martin were intentional, but that still doesn't mean somebody should have gotten beaned after that. That's just standing up for your teammates.

But then after Ortiz pulled that stunt and Papelbon freaked out after the A-Rod strikeout, that's a bit more than I can take as a Yankee fan and more than the guys in the clubhouse should take as competitors. I want to see Ellsbury get drilled first pitch to open the game tonight and then I'll be happy.