Should Vidal Nuno Even Be In The Rotation Anymore? 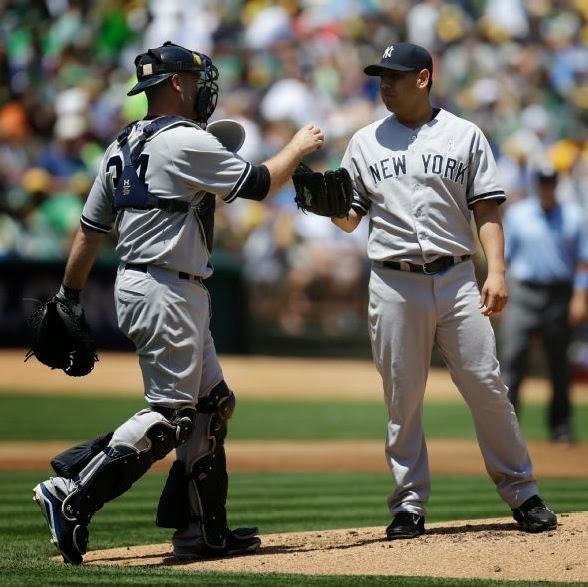 On Saturday morning, it was like things were finally starting to come together.  The Yankees had won 4 games in a row and looked pretty good doing it in all aspects of the game.  By last night, things were right back to normal.  Shoddy infield defense, inconsistent performances from the lower-level middle relievers, the inability to string hits together and drive guys in, and VERY uneven starting pitching.

Actually, uneven might be understating it a touch.  It was horrible.  After David Phelps' brilliant work on Friday night, the last 2 Yankee starters combined to give up 12 ER in just 7.2 IP on Saturday and Sunday.  The bulk of that (in the smaller amount of innings) came from the left hand of Vidal Nuno.  He gave up 6 ER to the first 10 batters he faced yesterday, and 8 overall in 3 innings.  Dom alluded to it earlier this morning and Katie hinted at it a few weeks ago, so now I'm just going to come right out and ask the question that needs asking.  Should Vidal Nuno still have a spot in the rotation?

The answer, of course, is no.  His poor performance yesterday solidified him as not only the worst starter on the Yankee staff, but arguably the worst in the American League.  For the season, he now has a 5.90/5.17/4.29 slash line in 61.0 IP.  The 5.90 ERA ranks dead last among 51 AL pitchers who've thrown at least 60 innings.  The FIP ranks 50th, as does his 0.1 fWAR.  However you feel about FanGraphs' version of pitching WAR, we can all agree that seeing one of the Yankee rotation members ranking that low in the category is bad, right?

Most of us expected that Nuno would not be a big strikeout pitcher at the Major League level and he hasn't been.  His 17.3% K rate is meh at best.  What I didn't expect was for him to be quite so hittable or to be so inconsistent with his command.  Nuno has given up 70 hits and 20 BB this season, way too many when you can't finish hitters off with 2 strikes.  In the Minors he was able to limit hits and walks to make up for the lack of top shelf stuff, but that hasn't translated to this level.  The greatest example of this is Nuno's sky-high HR rate.  At 15.2%, it's tied with Hisashi Iwakuma for worst out of those 51 AL pitchers and it hasn't just been bad luck.  9 of the 12 dingers hit off Nuno were out by "plenty" according to ESPN's Home Run Tracker, and 2 of the 3 "just enough" ones would have been out in over two-thirds of Major League ballparks.

What makes the high home count worse is the extra guys that are always on base when Nuno gives them up.  Case in point, yesterday.  Derek Norris' 1st inning home run isn't as big of a body blow if it doesn't come after Nuno gave up singles to the first 2 batters of the game, 1 of which came after he was ahead in the count 1-2.  In the 2nd, Nuno gives up a 1-out single to Kyle Blanks on an 0-1 pitch, a single to Nick Punto after having him down 1-2 and not being able to put him away, and a 3-run homer to Coco Crisp in the exact same situation.  3 hits with 2 strikes, 1 by a guy who can't hit and the other by a guy who's not who you think of when you think of the term "power threat".  The game is maybe 30 minutes old at this point and it's already over.

That's the kind of "is this going to be a disaster?" nervousness that Nuno brings to every start.  Inning to inning, game to game, there's no way to predict what he's going to give you.  In the last month, he's failed to complete 5 innings as many times as he's successfully pitched 6 or more (3).  He's become the biggest drain on the bullpen, and if we're being honest, he's probably a better fit in the bullpen handling David Huff's role.  A little long relief here, a little short relief there, soaking up the unimportant innings, that's the type of stuff that a pitcher like Nuno can handle.

That's also the role the Yankees can fill the easiest right now.  One they can't is starting pitcher and as bad as he is, Nuno might be the best they've got as a 5th starter option.  Joel De La Cruz was the starter for Triple-A SWB yesterday and he didn't exactly light it up.  Shane Greene has struggled to find his footing since returning to Triple-A, Manny Banuelos is still only tossing 3-inning outings in Double-A, and both Pineda and CC have yet to get back on a mound for even a light throwing session.  There aren't any more replacement starters to be had, so while he may not deserve his spot in the rotation and his existence there is doing more harm than good for the team, Vidal Nuno is going to continue to get the ball every 5th outing for the foreseeable future.
Posted by Unknown at 10:30 AM