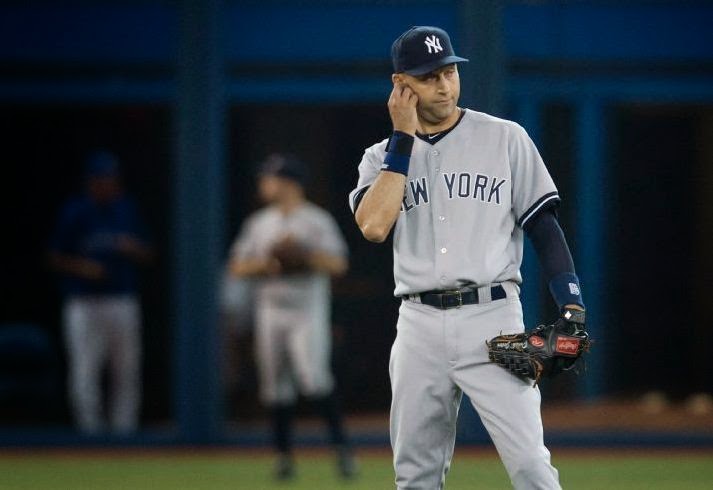 (Way to have your head in the game, Captain.  Courtesy of the AP)

I was in attendance for all 16 innings of the Brewers-Nationals game, so I saw my fair share of baseball last night.  As agonizing as that game was (take a pitch for me one time, Carlos Gomez!!), I would have watched another 16 innings of that 2-2 baseball if it meant not having to watch the garbage ball the Yankees played on their way to a 4th straight loss.

- Starter David Phelps wasn't terrible.  He worked the first 3 innings with only a walk and a single against him.  But he got into trouble after putting the leadoff runner on in the 4th and hanging a curveball to Dioner Navarro with 2 men on.  1 swing, all that good work undone.

- The next 3 runs in the 5th weren't exactly his fault.  With 2 on and 2 out, Derek Jeter fielded an easy groundball from Edwin Encarnacion and brain farted, looking at second and third before finally throwing to first.  Encarnacion beat it out to keep the inning alive and Colby Rasmus hit a bases-clearing single to make it 6-0.

- The Yankee offense valiantly chipped away (for real) to get back into the game.  Jeter homered to start the 6th, Brian Roberts hit a 2-run home run in the 7th, Jacoby Ellsbury singled 1 home, and a Jose Reyes throwing error plated the 2 tying runs.

Of course, more bad defense had to make all that effort for naught.  Jose Reyes doubled off Adam Warren to start the bottom of the 9th and came around to score when the infield couldn't handle a sac bunt properly.  Throwing error by Yangervis Solarte, Reyes trots around to score, game over.

- Phelps: 5 IP, 8 H, 6 ER, 1 BB, 7 K.  Not all totally his fault or not, Phelps did give up 6 runs in 5 innings.  Anytime you're giving up multiple multiple-run hits in a single game and getting yabo'd by Dioner Navarro, you're probably not on top of your game.

- Carlos Beltran: 0-4, 1 K, 2 LOB.  Good thing the Yankees are scrapping the plan to move him back into the outfield now.  You wouldn't want that hot bat having to go back on the DL for elbow problems.

Series finale today and the Jays can match last week's sweep to regain their lost ground.  Hiroki Kuroda and Drew Hutchison are the starters.
Posted by Unknown at 6:39 AM