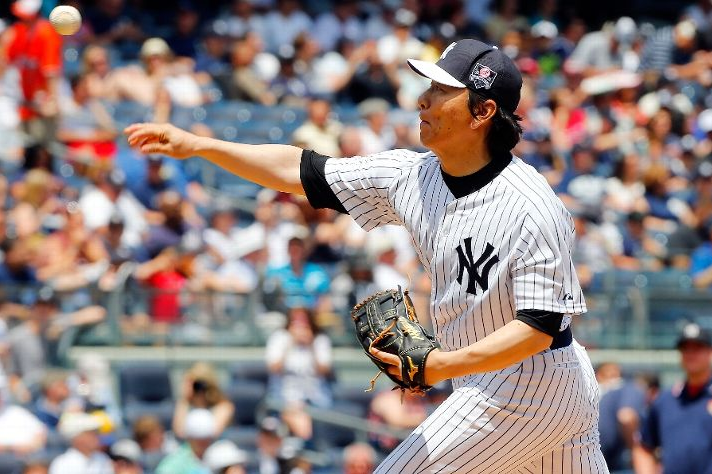 It was Old Timers' day at The Stadium this afternoon, always one of the best days of the year.  Fresh from the Saturday ceremony honoring Tino in Monument Park and the quick, dirty beatdown at the hands of Bud Norris and the Baltimore Oriole bats, the Yankees came back today looking to draw some inspiration from all the past Yanks who were on hand, including recent teammates like Hideki Matsui and Johnny Damon and all-time greats like Goose Gossage, who joined Tino in his Monument Park induction.  Another series victory halfway through this stretch of interdivisional games would have been the perfect way to end a strong week and Masahiro Tanaka was the perfect man for the job on the mound.  He was pretty good again, not as great as we've seen him, but once again it was the complete and utter lack of offense that did them in.

- Tanaka never seems happy with his command, but today he did have a few real problems.  He gave up a pair of singles to start the game in the 1st, walked a batter with 2 outs in the 5th, and left a 2-strike slider up to Jonathan Schoop in the 2nd that Schoop hit for a solo home run.

- The lineup couldn't put anything together against Baltimore starter Chris Tillman.  A challenge overturned a potential Brett Gardner leadoff double in the 1st, a Derek Jeter GIDP killed a rally in the 3rd, and Jacoby Ellsbury was left stranded in the 4th after leading off with a double to right.

- Joe sent Tanaka back out for the 7th at 93 pitches, and that might have been the decision that decided the game.  J.J. Hardy singled, Manny Machado doubled, and both scored on outs to make it 3-0 and mar Tanaka's line.  Give the O's credit.  They worked him hard and finally broke through late.

- If Adam Warren was looking to show he shouldn't be moved back into the rotation, he did a good job.  He gave up 4 runs in the 8th inning, the big blow a bases-clearing double after an intentional walk, to put the game out of reach.

- No shortage of controversy in that inning when the umpires decided that Steve Pearce did not interfere with Kelly Johnson on a ball he threw into the stands for what was ruled an error before the intentional walk.  My opinion is jaded as a Yankee fan, but I thought the interference was blatantly obvious and agreed with Joe's assessment that it was a dangerous and malicious play.

- McCann: 0-4, 2 LOB.  Popped out twice and heard his first Yankee Stadium boos.  They're well-deserved this far into the season.  This pattern of 1 big game followed by a bunch of shitty ones needs to end.  Figure it out, dude.

Maybe they can get the ship righted when the play the Jays again.  Gotta travel north of the border for this series and it starts tomorrow night with Chase Whitley facing Marcus Stroman.
Posted by Unknown at 5:58 PM