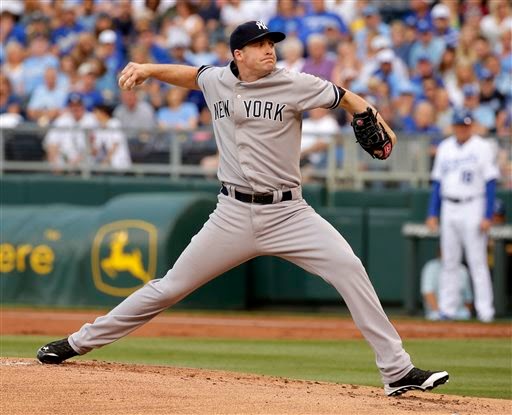 The Yankees have battled rotation inconsistencies since Opening Day.  Be it the underperformance of CC Sabathia and Hiroki Kuroda, the injuries to Sabathia, Ivan Nova, and Michael Pineda, or the uneven, all-or-nothing nature of their injury replacements, the only thing constant about the group has been the non-constantness with which it has operated.  Except for Tanaka of course.

Well, him and the newest member of the injury-replacement brigade.  Chase Whitley took a spot in the rotation on May 15th, replacing Sabathia and becoming the "new" 5th starter.  He's made 5 starts in that spot and pitched to a 2.42/2.26/3.74 triple slash in 26.0 innings pitched.  He's been worth 0.9 fWAR in those 5 starts, tied for 2nd best among all team starters with Kuroda, and has helped to somewhat stabilize the back end of the rotation.  Last night he had his best start to date, pitching 7 innings of 2-run and not walking a batter while striking out 3.  Is this for real?  How is he doing this?


With a little bit of everything.  Whitley doesn't possess natural swing-and-miss stuff at the MLB level (18 K in 26 IP), so he's making his defense work for him by throwing strikes early and inducing a healthy amount of groundballs (46.3% GB rate).  This approach has helped him steer clear of the long ball, as he's yet to allow a home run, and he's also helping his cause by not walking guys (2.8% BB rate, 1.04 BB/9).  He's also been remarkably consistent in his 5 appearances.  3 ER or fewer in all 5, no more than 2 BB in any game, and no free passes in his last 3 starts.

To get swings and misses when he needs them, Whitley has featured a 2-pronged approach against righty and lefty hitters.  Against righties, he's fastball-slider.  Tries to get ahead early with the fastball to set up the slider down and away with 2 strikes.  Against lefties, he features the changeup as his out pitch, throwing it down and away from them when he gets ahead.  He'll sprinkle in enough of each to both sides and a 2-seamer now and then to keep hitters honest, and he's mixed those pitches successfully to keep them off-balance and not allow them to time up his average stuff.

Now the no-HR trend is going to end at some point, and when it does it's going to dent his numbers up pretty bad.  The lack of strikeouts will catch up to him eventually too as teams start to get familiar with his stuff and approach, and that 3.74 xFIP is a telling sign of that.  But Whitley's .313 BABIP against isn't far off league average, so it's not like he's doing this completely with smoke, mirrors, and good luck.  The guy knows how to pitch and he's pitching to his strengths to great success.  With timetables on Sabathia and Pineda still way out, Whitley has been invaluable and may be the 3rd best starter on the team right now.
Posted by Unknown at 3:38 PM