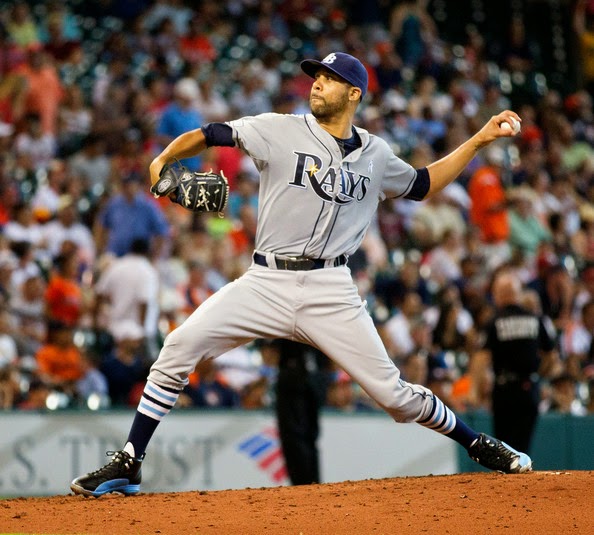 This one is less of a rumor, more of an idea from Jim Bowden at ESPN.  He posted something earlier this week on potential trade scenarios for the Price and the Rays and 1 of them was the Yankees.  It's an Insider-only article, but the proposed trade package is Gary Sanchez, Luis Severino, and Peter O'Brien for Price.

I don't know about you guys, but I'm making that deal in a second if I'm the Yankees.  The problem is I don't think the Rays would ever make it.  Sanchez might not be the best catching prospect on the Yankees anymore, as good as he's been, Severino is still in his first week of High-A ball, and O'Brien is a high strikeout guy with no position.  You aren't giving up your best player who you have under team control through next season for that package.  Who in that trio is going to make a serious Major League contribution in 2015?  In 2016?

The Yankees should absolutely be looking into trading for Price if the Rays are interested in any of their prospects.  They're just going to have to make a much better offer than Bowden did.

In a short injury update post for CSN Philly, Jim Salisbury made reference to the Yankees having a scout on hand in Atlanta on Wednesday to watch Phillies center fielder John Mayberry Jr. in action.  According to Salisbury's "plugged-in major-league source", the Yankees are a "team to watch" with respect to Mayberry.

I could see this.  This would be the type of move the Yankees have made in each of the last few seasons, a smaller deal for a marginal upgrade at a position of need.  The 30-year-old Mayberry is a righty-hitting outfielder with a .245/.307/.435 slash line in 1,327 career PA.  His calling cards are power and defensive flexibility, as he's hit 5 HR in 95 PA this season and played all 3 outfield spots.  Mayberry beats up left-handed pitching to the tune of .275/.328/.536 career and has pretty good BB and K rates this year in limited playing time.  He's a little bit better than Alfonso Soriano in every way.

We haven't heard any specific teams yet, but you have to assume there are plenty out there who are still closely following the Yankee catchers.  The 2 that stand out as the most likely to be moved are John Ryan Murphy and Francisco Cervelli.  Personally, I don't see how Murphy getting regular at-bats in the Minors helps his trade value any more than hitting how he was hitting in the Majors, but I can appreciate the logic in wanting to get both of them more playing time to showcase them to interested parties.

You could very easily make the case that Murphy is the team's top prospect and trade chip right now, so he could be one of the major parts of a package for Price or another starting pitcher if the Yanks want to go after a bigger name.  Cervelli probably won't bring back much in any deal, but if he stays healthy and hits a bit maybe he could be moved to a team who needs catching help for a useful relief arm.

The clock's ticking down the deadline and things are only going to get more fun from here.  Mike E. said last week that he was anticipating a busy trade season this year, and if he's right I hope the Yankees are a big part of it.  They need more than the return of a few pitchers to make themselves true playoff contenders.
Posted by Unknown at 10:30 AM