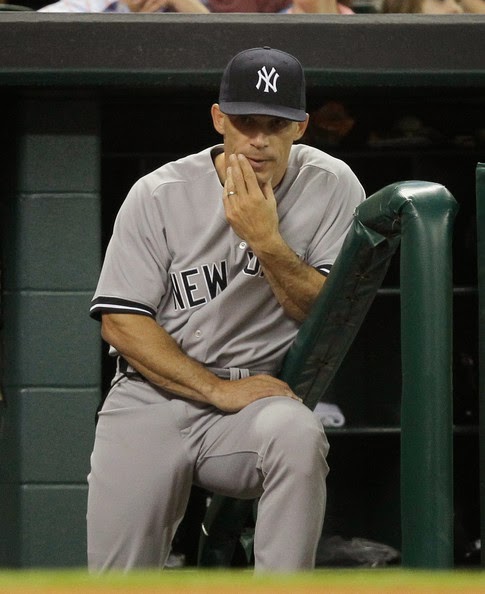 (Really shouldn't take that much thought.  Courtesy of Getty Images)

I've written this post before, but if you're not familiar with it, here's the updated version.

Joe decided to give Brian McCann and Brett Gardner a night off last night and Derek Jeter a half-night off by DHing him against lefty Chris Sale.  That left the middle of his lineup pretty thin and the bottom half of his lineup almost non-existent.  A 6-9 of Brian Roberts, John Ryan Murphy, Brendan Ryan, and Zoilo Almonte wouldn't be ideal against Chris Hammond let alone the best left-handed pitcher in the American League, but that's what Joe went with.

Sale predictably shut down that weak lineup over his 6 innings of work.  Made them look terrible.  Took them out back and slapped them around like children.  The only thing that stopped the madness was the pregame pitch count limit Robin Ventura had put on Sale.  Now resting McCann I get.  He was due for a day off, he hasn't hit lefties that well, and he just had to play a day game after a night game in the 2 games against the Cubbies.  But sitting Gardner?  What was that about?  What reason was there for not having the 2nd-best hitter in the lineup right now in a lineup that was already half-gutted and facing an elite pitcher?

It couldn't have been that he was tired and needed the rest.  Gardner's gotten 3 days off in the last 2 weeks thanks to scheduled off-days and a rainout, the most recent on Monday of this week, and he had a half-game off earlier in the month against Tampa Bay.  He's healthy, he's productive, he's not overworked.  Had there been something physically wrong with him, I think we would have heard about that.

It couldn't have been that the defensive plans called for Zoilo instead.  That wouldn't make any sense.  No disrespect to Zoilo, but he's not as good defensively as Gardner is and he never will be.  David Phelps hasn't exactly been shutting opposing teams down lately.  He gives up a lot of contact and a lot of hard contact.  You want your best defensive outfield behind a guy like that and that outfield doesn't include Zoilo over BG.

I know it couldn't possibly be the tired old "Brett Gardner can't hit lefties" argument.  Because a 15-second check of FanGraphs would have told anybody with internet access that that isn't the case.  In 58 PA against left-handed pitching this season, Gardner has a .373/.429/.392 slash line.  He hasn't hit them for a lot of power, but his BB and K splits against righties and lefties are nearly identical so it's more than just some flukey hits.  Gardner knows what he's doing against southpaws and even if he didn't, it's not like Zoilo hits them any better.  As a switch hitter, Zoilo's much stronger hitting righties from the left side than lefties from the right side.

If the situation were different and Gardner were OPSing .650 against left-handers, it still would have made more sense to play him over Zoilo last night.  Does Zoilo really give Joe a better chance to beat Chris Sale and the White Sox than Brett Gardner does?  I don't think there's any way to try to make that argument and take yourself seriously.  I understand Joe's got a lot of balls up in the air when it comes to managing the day-to-day right now, and part of that is making sure he's keeping his regulars rested.  What I don't understand is him lumping all those rest days into 1 game and severely hurting his chances to win that game.  With Beltran out, Soriano and Ellsbury slumping, and a short and shaky bullpen, Joe needs as much offense in there every day as he can get and he should have had Gardner in there yesterday knowing that he wasn't going to have McCann.

Give McCann a day off last night and Gardner tonight if you think he needs a day.  Or Jeter, or Teix, or whoever.  Just don't give them all a night off on the same night and make life easier for Sale and don't use the excuse that you wanted to play the matchups agaisnt a lefty because that's a lame excuse.  The matchups were and are more favorable for Gardner any way you slice it.  He's the most valuable player on the team right now and he wasn't re-signed for $52 mil to play platoon splits with Zoilo Almonte.  Play the guy.
Posted by Unknown at 9:30 AM

It had everything to do with the fact that Sale has not given up a single hit to any left-handed batter this season.

It probably did. And if so, that's a stupid reason.