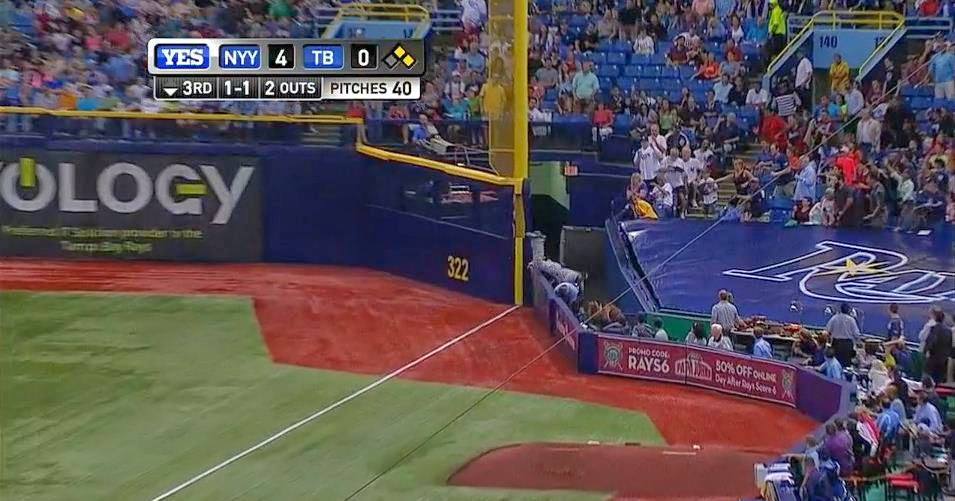 On Thursday, April 17th, Beltran took a nasty spill over the outfield guard rail chasing down a flyball in Tampa Bay.  The MRIs on his left shoulder and right wrist came back clean and he got a day off the next day to ease the soreness his body was surely feeling, but ever since then he's been a completely different hitter.  Even after an 0-5 day on April 17th, Beltran still had a .298/.339/.614 tripleslash.  In the 17 games since then, he's gone 13-68 (.191 batting average) and seen his slash line slip to its current level.  In the month of May, he's hitting just .167/.235/.200, and his double down the left field line on Friday night is the only XBH he has to his credit this month.

Joe made the decision to sit Beltran yesterday for the day game after a night game, although Beltran did get 2 plate appearances after entering the game as a pinch hitter.  While there has been no talk from Beltran or the team about his health, it might be worth revisiting his shoulder and wrist and giving him a more thorough physical evaluation to see if there is something nagging that's causing this dramatic decline in production.  The ability of Beltran's body to hold up was the major concern when the Yanks gave him the 3rd year on his deal last year, and if there is something wrong with him, it's better to get it identified and addressed now.

If that means putting Beltran on the 15-day DL to rest and heal, so be it.  He isn't bringing much of anything to the table offensively right now and his defense continues to be a a run-creating opportunity for the opposition.  As bad as he's looked lately, what other explanation could there be?  I don't believe a hitter with his skill and experience could completely fall off the cliff that quickly.  The change in hitting approach and the lack of power strongly suggests that it's something physical.  If it is, I'd rather take the short-term hit now and get Beltran better than let some undiagnosed ailment linger and fester into something more serious later in the season.
Posted by Unknown at 1:30 PM