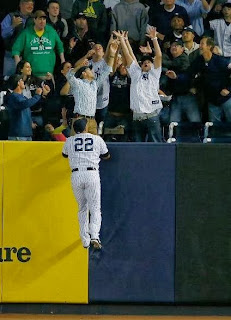 - Kuroda: 5.2 IP, 5 H, 5 ER, 2 BB, 5 K.  The command issues persist and when you're working with as little margin for error as Kuroda was last night you aren't going to survive.  He couldn't locate his sinker or keep his slider down and he got pounded for it.  Very disappointing ending to what looked like it was shaping up to by a CY-caliber season.

Phil Hughes makes what should be his final start as a Yankee tonight and this occasion won't have any elaborate pregame ceremony attached to it.  He'll just get Tampa ace David Price facing off against him with the chance to officially eliminate the Yankees from the playoffs on the line.  Good luck, Phil.  You're going to need it.
Posted by Unknown at 7:01 AM