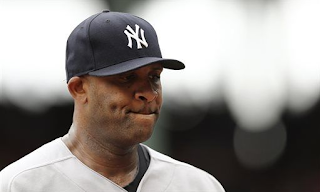 - CC: 6 IP, 9 H, 5 ER, 4 BB, 5 K.  There's nothing good to take from CC's start.  Nothing he did looked good, he gave up too many hits and too many walks, and a really good lineup did what it should do against a really bad pitcher.  That's what Sabathia is these days and it's what he's been for the entire second half of the season.  He really needs to break everything down and start from scratch after this season.  No way he survives the remainder of his contract trying to pitch this way.

- Rest of the Lineup: 1-26, 1 RBI, 2 BB, 5 K.   Only other hit was a Brendan Ryan single.  Yes, Brendan Ryan.  I can understand having Gardner and Soriano out leaving the lineup severely weakened, but you can't get 1 hit from the worst hitter in your lineup as your only other hit in a game and expect to win.

If the Red Sox didn't strike a fatal blow to the Yankees' playoff chances today, they will with another win tonight.  Ivan Nova and his iffy triceps takes the ball against Clay Buchholz in the series finale.  Live blog will start sometime before
Posted by Unknown at 4:22 PM