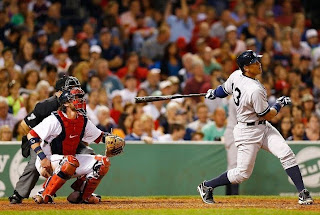 - A-Rod: 3-4, 1 HR, 2 R, 2 RBI, 1 HBP.  How juiced (non pun intended) was A-Rod for that 6th inning fastball he got?  The 446 foot estimation of his home run is the longest homer of the season for any Yankee hitter.  I'd say the hip is feeling pretty good and there's still some gas in the tank.  Too bad we might only be seeing it for another 38 games.

- Gardner: 2-5, 1 3B, 3 RBI, 1 HBP, 1 K, 2 LOB.  Had the biggest hit of the night with that bases clearing triple int he 6th, and you could tell he was fired up about it after being the most vocal Yankee out of the dugout during the A-Rod plunking.

- Sabathia: 5.1 IP, 7 H, 6 ER, 5 BB, 5 K.  He got off to a rough start, then couldn't settle down when his team got him back into the game and into the lead.  His command was off again and he just isn't going to get by against a good lineup like this without it anymore.  Not to mention the fact that he didn't get it done trying to repay the favor for the A-Rod plunk.  If you're going to put 12 men on base in less than 6 innings, you could have at least made the last one Ellsbury on a ball in the ribs.

The Yanks will head back to The Stadium to welcome the basement-dwelling (again) Blue Jays to town for a doubleheader on Tuesday.  They'll get a day of rest beforehand today.  Oh goody, more time for A-Rod drama!
Posted by Unknown at 6:54 AM