The End Appears Nigh For Kevin Youkilis 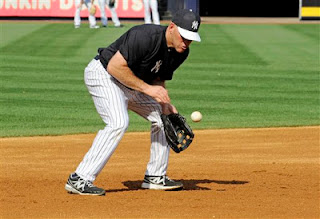 Kevin Youkilis was out of the lineup again yesterday, for the same reason he's been out of the lineup for every game he's missed this season: his back.  Youkilis strained it diving for a ball at first base in Saturday's game and was held out yesterday by Joe after reportedly feeling stiffness "stiffness" in the back.  He'll get an extra day of scheduled rest today with the off-day, and Joe certainly sounded like he was going to play him on Tuesday.  But with the continued back problems limiting Youkilis' playing time and severely hindering his production, it's almost time to ask if he's done.

Youkilis has now played in just 25 of the team's 63 games this season (39.68%).  Over the course of the full 162-game season, that plays out to just a tad over 64 games played, which would be the lowest games played total of Youkilis' career since he became a full-time player.  16 of those games played came in the first 3 weeks of the season, when Youkilis benefited from a couple extra rainouts and scheduled days off.  In those games he hit .279/.353/.443 before missing his first game on April 21st.  Since then his game line has looked like this: 6 games missed, 1 game played, 30 games missed, 3 games played, 1 game missed, 5 games played, 1 game missed and counting.

Since suffering his first back strain against Toronto, Youkilis has seen his batting line drop to .239/.314/.380, good for just a .305 wOBA and 88 wRC+.  That's in a very small sample size of plate appearances, so the results aren't proof positive that he's washed up, but that's not what this is about.  This is about the fact that Youkilis just doesn't have the ability to stay on the field anymore.  The back has been a problem for him all season long.  For all we know it was bothering him in Spring Training, and there's been nothing since that first game missed to give us any reason to believe it's going to get better.  Whether he's missing games at a time or weeks at a time, Youkilis has crossed over from an injury concern to an injury expectation.

And when he is on the field he doesn't look good.  Youkilis is stiff and slow at both third base and first base, every movement looking like it's causing him pain.  His swing has become equally stiff and slow, no longer reminiscent of the lively one we saw in spring camp.  He's striking out more than he ever has and he's walking less.  Every part of Youkilis' game has been greatly diminished this season, and back injuries aren't something that goes away easily.  Not when you're 34 years old with a lot of games on your odometer.

Like so many other problems the Yankees have dealt with this season, this one wasn't unexpected.  The main reason so many people scoffed at the $12 million the Yanks paid Youkilis was because it was a known going in that he would be missing time with injury.  Also not unexpected is the horrible timing of this.  After a good first week, David Adams has completely fallen apart at the plate.  He's down to .217/.239/.348 on the year (.265 wOBA) and still hasn't drawn a walk in 71 PA.  As SJK of NoMaas pointed out yesterday, he really should be sent back down to the Minors but the Yankees can't afford to do that because of Youkilis' back.  With what Youkilis has shown since coming off the DL, Adams could have to be re-called a day after getting sent down.

Kevin Youkilis has been a great hitter for the better part of his career.  He's won some awards and he's won himself a ring.  He wouldn't have been a bad option to replace A-Rod for the first half of the season if he could have stayed healthy, but that ship appears to have sailed.  These back problems have sapped a lot from Youkilis as a player, namely his ability to stay on the field for more than a few days at a time.  It looks like only a matter of time now before he ends up back on the shelf again and maybe for good.
Posted by Unknown at 3:30 PM