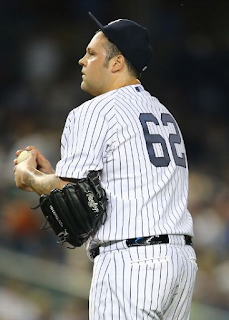 I still think it's a little early to start talking about Joba Chamberlain as a trade piece, despite Buster Olney sparking some chatter on that front with his tweets earlier this week.  The Yankees aren't going to be in sell mode at the deadline if they're even close to the postseason race, and it's highly unlikely they could get matching value in return for Joba in a position of need.  For now, let's just see if Joba can keep himself on the field before worrying about whether or not he'll be wearing a Yankee uniform on it.

What I will talk about is where Joba stands in Joe's bullpen pecking order right now.  He had been the official 7th Inning Guy before getting hurt and was pitching well before he got hurt.  Last night, Joe went the 'pen in the 7th inning of a 1-run game after Vidal Nuno left and it wasn't Joba he called on but Shawn Kelley.  Kelley has been a monster this month and he was last night again, striking out the side swinging.  Joba got called into mid-inning fireman duty in the 8th and didn't exactly shine in that role.  Has Joba already slid down the totem pole?  How will Joe use him if Kelley has bypassed him?  That's what I'd be watching over these next few weeks before concerning myself with possible Joba trade scenarios.
Posted by Unknown at 10:30 AM