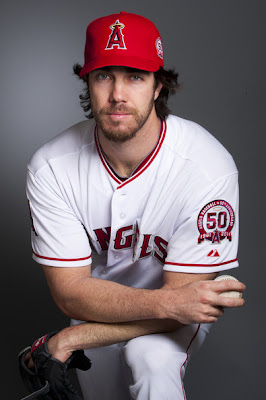 (Might have to trim that hair, guy.  Courtesy of Getty Images)﻿

While we're on the topic of current/former Angels who may be a good fit for the Yankees, let's talk about Dan Haren.  The Angels made some waves yesterday announcing that they were "interested" in trading both Ervin Santana and Haren, 2 members of their rotation with expensive 2013 contract options who both experienced some serious decline in their performance in 2012.  Santana has already been shipped to Kansas City in a deal, which is just fine with me because he absolutely sucks, but Haren is a much more interesting case.  And the more I've let the idea of Haren in pinstripes simmer in my head for the last day or so, the more I think the Yankees pursuing a trade for him makes sense.

For starters, he's a damn good pitcher who's still in his prime.  Haren turned 32 in September, hardly the age to be put out to pasture despite a down year this season.  He's a career 3.66/3.64/3.59 pitcher with a K/9 rate over 7 and a BB/9 below 2.  He made at least 33 starts and pitched at least 216 innings for 7 consecutive seasons from '05 to 2011, and this past season he still managed to make 30 starts and pitch 176.2 innings despite being plagued by back problems.  Those back issues more than likely had something to do with his un-Haren-like tripleslash that was over 4.00 across the board in 2012, but with his K and BB rates staying right around his career averages it's also likely that some bad luck with respect to BABIP against (.320), HR rate (career-high 12.8%), and strand rate (70.9%) were contributing factors as well.

With Haren's impressive overall track record, he doesn't seem like the type of player who the Angels should willingly be looking to part with.  That means they either know something that other teams don't about Haren's back or this is a straight salary dump to try to alleviate the financial burden they took on last year with the Pujols contract that ultimately ended up with them on the outside looking in come playoff time.  If they are looking to shed payroll, the likelihood is that their prospect asking price is going to be significantly lower than it rightfully should be for a pitcher of Haren's caliber.  To be able to add Haren to next season's rotation without affecting future payroll plans and without giving up any top prospects would be a big win-win for the Yankees.

And this is where the hypothetical situation wheels really started turning in my head.  With the Yankees needing to address both the rotation and getting younger and more flexible in the lineup, and all signs pointing to them making big pushes to bring back Hiroki Kuroda and Andy Pettitte for next season, I like the idea of aggressively pursuing a trade for Haren if the asking price is right.  A rotation built around CC, Kuroda, Haren, and Pettitte as the top 4 makes Phil Hughes and Ivan Nova more expendable and available to include as part of a trade package for somebody like Chase Headley.

Hughes could be a much more effective pitcher in Petco Park, Headley makes the lineup deeper and more balanced.  It's not quite a "2 birds with 1 stone" situation, and there is some risk involved for both sides as both Hughes and Headley are only under contract for the very near future, but I have a hard time believing a Yankee roster minus Hughes and plus Haren and Headley is worse off than it would be if they just kept Hughes.  And with the Royals adding Santana yesterday, the possibility of them and the Yankees hooking up as trade partners has decreased.

Again, this is all hypothetical and mostly me thinking out loud, but there's a lot to like about this possibility if you're a Yankee fan.  If the Yankees are interested in Haren they will have to do their due diligence and then some checking on that back injury, and if the Angels do take a hard stance on wanting top prospects in return then it's probably wise to walk away.  But bringing in Haren and then packaging a Hughes or a Nova to address the lineup would go a long way in improving the team for 2013 while still maintaining payroll flexibility for 2014.
Posted by Unknown at 2:30 PM