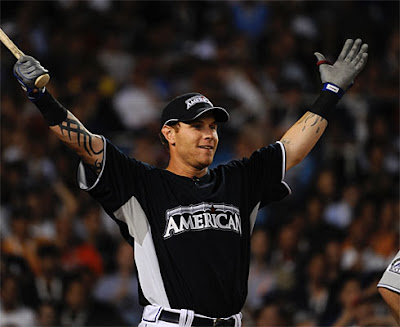 Hamilton is the hands down best position player available this offseason.  Like Robinson Cano, he's reportedly seeking top-of-the-market dollars, 7 years at $25 million per to be exact.  Like Cano, Hamilton is every bit worth that price tag based on his production alone (3 straight seasons of wOBA above .365, 2 out of the 3 above .380, 16.9 total fWAR since 2010).  And like Cano will, Hamilton enters his big-money free agency year already across the 30-year-old threshold.  With 30-somethings like A-Rod and Mark Teixeira already seeing their productivity candle flicker a bit, and fellow 30-something Albert Pujols stumbling out of the gate in the first year of his new mega-deal, teams are going to be more wary than ever of handing out that kind of contract to Hamilton.  He comes with decidedly more risk than any of them did, because of his age, his spotty injury history, and the excess baggage that his past brings, be it issues with his eyesight, tobacco use, caffeine intake, or the possibility of a more serious relapse.

The chances of any team ponying up $175 mil for 7 years of Hamilton is slim to none, and maybe it's just me but it doesn't seem like there's a whole lot of interest in him out there right now.  I don't read ESPN Dallas regularly (because why would I?), but Hamilton's name isn't popping up in a lot of mainstream baseball talk on that network, and the chatter about him on MLBTR is relatively minor.  Baltimore was reported to be interested a few weeks ago but that has died down; the Mariners, Braves, and Phillies have all been connected but nothing serious; and the Fraud Sawx have already gone out of their way to temper the talk connecting them to Hamilton.  For a guy who's still in his prime and talent-wise is probably the best player available in this year's free agent pool, this seems a little strange.

Which brings me back to my original question.  If the market for Hamilton takes a dump, and teams aren't too keen on the idea of signing him for 5 years let alone 7, is there an opportunity for the Yankees to slip in and make him a monster 1-year offer he can't refuse?  Adding Hamilton to the middle of their order and their outfield makes them a better team in 2013 without any worry of negatively affecting the 2014 payroll, and Hamilton could use 2013 as an audition to convince teams that were hesitant to sign him that he isn't as risky as they think.  If Hamilton were to stay healthy, play 140-150 games at the level he's produced in the last 3 seasons, and do it under the glaring spotlight of the New York media without any problems, that would probably loosen up a few more checkbooks next offseason.

So what would it take?  1 year/$30 million?  32?  35?  How high would the Yankees have to go?  Would they even be willing to go?  It's an incredible longshot, sure.  I think even in the worst case scenario a team will still make Hamilton a 3-4 year offer at or close to what he's asking per year, and that team isn't going to be New York.  But their outfield replacement options are already running thin, at least in terms of everyday guys who can exceed or come close to replicating what Swish gave them the last 4 years.  If the Hamilton market continues to stay quiet, isn't this an option Cash and ownership should at least consider?
Posted by Unknown at 10:54 AM