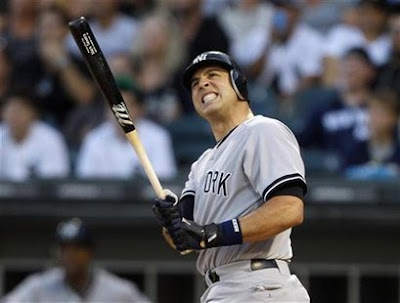 2012 has been a disastrous season for Teix, in every way imaginable.  His offensive numbers are down across the board for the 4th straight year, the 4th year of his 8-year Yankee contract.  And now firmly entrenched in his 30s, Teix felt the sting of the injury bug for the first time in years this season.  His curious bout with whooping cough or the plague or whatever he had earlier in the year, his wrist injury, and 2 calf strains have allowed him to play just 120 games this season, and even if he makes it through these final 3 healthy he will still set new career lows in games played and plate appearances.

Narrowing the scope some to focus on just the recent past and the present, it's hard to say what kind of expectations there should be for Teix for the rest of this season.  He hasn't played in a game in a little over 3 weeks, and has just 7 PA against Major League pitching since August 27th.  He was already in the middle of battling his wrist ailment when he strained his calf, and he only got back to the point where he could participate in full baseball activities a few days ago.  He's played 2 instructional league games, and before that his calf was healthy enough to run but not healthy enough that he didn't have to take a day off before trying it again.  To say that Teix is coming back rusty would be an understatement, and to say he's coming back completely healthy is a stretch, but the circumstances surrounding the Yankees' present situation have left them no choice.

As I mentioned multiple times over this past weekend, the middle of the Yankee batting order is holier than Catholic Swiss cheese right now, and the continuing cycle of replacement level bats in the outfield while Nick Swisher fills in at first is not getting it done.  The mere presence of Teix and his power potential, especially with the short porch in right at The Stadium, is enough to make pitchers reconsider how they approach that middle of the order and provide some form of protection for the guys hitting around him.  And with the Yankees losing control of their own destiny over the weekend, they have to approach every game like a one-game playoff this week just to keep pace with Baltimore.  The only way they do that is to win, and the chances of winning become greater with Teix on the field and in the lineup, even at only 70-80%.

While the calf is still a huge question mark, one that won't be answered until we see how he comes through 9 innings tonight, the one positive to take from Teix's extended layoff is that it gave him some much-needed time to rest his wrist.  If that's at least back to 100% or close to it, there could be some pop returned to his bat.  But there's still the limited rehab outings and adjustment on the fly that Teix will have to go through, and the high level of risk of re-injuring the calf.  At best, he draws some walks, maybe cracks a few homers, and stays healthy to help the Yankees win the 3 games they need to win this week.  At worst, he completely blows the calf out running out a ball to first in his first at-bat tonight and we're right back to where we've been.  We'll just have to wait and see.
Posted by Unknown at 10:07 AM