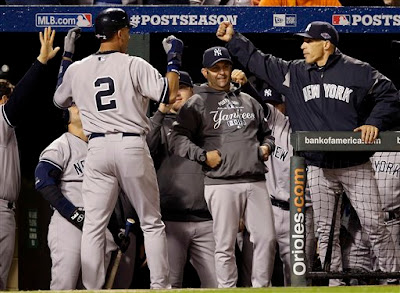 - If there was a good omen for the struggling A-Rod it was his history against Hammel.  He came in 8-22 with 4 HR in his career against Hammel, a sign that his limp bat could come to life.

- After batting 8th in the season finale, I took Joe moving Ibanez to 9th in the batting order last night as a sign that he's going to continue to use that spot as a platoon spot, which should mean Nunez getting the start in Game 2.

- As for Hammel, Buck commenting in his pregame presser about which of his starters were available out of the bullpen last night didn't exactly come across as a vote of confidence in Hammel or his knee, .

- Worst thing about the rain delay was how badly it threw off my karmic timing.  As part of my yearly postseason insanity, I wore the exact same t-shirt and hat combo I did on Wednesday, got the same 12-pack of the same beer, and had the same pizza from the same pizza place scheduled to be delivered about 15-20 minutes before game time.  That all went out the window by 7PM, when the beers were going down quicker than they should have and the pizza was half gone but the game still hadn't started.

- Memo to Orioles fans: Fuck off with the "Seven Nation Army" soccer chant before the game.  100 bucks per person says at least half of you never stepped foot inside that stadium before last night, so cool it with the "hot crowd" bullshit.

- Great at-bat by Ichiro on his RBI double in the 1st.  He worked the count, fouled off some pitches, and took a 2-2 fastball for a strike to set himself up for a 3-2 fastball.  When Hammel threw it over the middle, he was ready for it and smoke it into the gap.

- Terrible play and even worse decision by him on the follow-up steal attempt, though.  He gave a possibly rattled pitcher a free out, completely changed the way Hammels went about pitching to A-Rod, and set up what eventually became a low-stress "win" of an inning for Hammel.

- CC didn't look affected by the long wait through 2 innings.  He was locating his fastball on the outside corner and down in the zone, and threw some good sliders.

- He got set up by some bad BABIP luck and good bunt execution in the 3rd, but the 2 runs were all on CC and his horribly hung slider to Nate McLouth.  Good idea going for the K in that situation, but very poor pitch execution.

- Hammel wasn't quite as sharp with his stuff as CC through 3, but he made some good pitches when he had to and generated a fair amount of weak contact on fastballs in and sliders down.

- Interesting little faux pas in the 3rd by Cal Ripken when he was discussing Ichiro's ability to hit to all fields and dropped a doozy of a, "little chinkers to left field" line.  Not good, Cal.  Not good at all.  Especially considering Ichiro's Japanese.

- The Yanks got 2 leadoff walks, in the 2nd and 4th innings, and capitalized on the one in the 4th with an RBI single by Mark Teixeira.  The highlight of the whole inning was A-Rod losing the ball on a Cano liner and herp-a-derping his way into second base.

- Every highlight needs a lowlight to counter balance; I guess that's what Teix was thinking as he got thrown out trying to stretch to a double.  Come on, dude, pick up your teammates running or a base coach or something!  Don't just jog along watching the right fielder field and throw the ball into the base you're sliding short of!

- Hammel was at 99 pitches through just 5 innings while CC was at 61, showing both the differences in their level of command and the differences in opposing offensive approaches.  Always something to be said for the Yankees' patience.

- A-Rod got at least 3 good fastballs to hit from Hammel by my count, and he did nothing with any of them.  He looks late on everything, like he isn't seeing the fastball well at all.  Very frustrating.

- CC got BABIPed to death on 2 broken bat hits and 2 GB hits that found holes, but his location stayed sharp and down in the zone through 6.

- If you're letting the TV yell at your for forgetting to bring the avocados to the party, you're probably huffing some really good bath salts.  And you're a jerk for getting bitched around by the TV like that.

- Tough at-bat by Russell Martin to draw a third leadoff walk in the top of the 7th.  He fouled off a couple of really good pitches, forced more pitches from Troy Patton.  Well done.

- I was OK with Joe letting Ibanez hit against Patton, a lefty with spotty command, but I was a little surprised to not see him pinch run somebody for Raul.  It didn't end up mattering, but a second run in a tight game could have been huge.  Why not play for it knowing you've got lefty bats on the bench?

- It was vintage Yankee RISP Fail in the 7th.  Jeter sacrifices runners to 2nd and 3rd with 1 out, a ball hit right at an infielder turns into an out at the plate, and A-Rod strikes out.  Like I said on the AB4AR Facebook Page, if you're sacrificing outs to let A-Rod hit with RISP, you're actually just sacrificing runs.

- CC's slider command started to elude him a bit in the bottom of the 7th; that's the only reason he would go to full counts on Lew Ford and Robert Andino.

- Good pitch by CC to Hardy in the 8th, fastball on the outside corner, but a better piece of hitting by Hardy to let it get into the zone and go with it to right.  Good baseball by all parties involved.

- But a GREAT job by CC to strand Hardy at second.  I don't know what pitch was better, the strikeout slider to Adam Jones or the first-pitch fastball that sawed off Matt Wieters.  Great way to end a great outing.

- The call on the 1-0 pitch will be disputed by Orioles fans, but what's indisputable is the effect it had on Jim Johnson's next pitch.  It had to be another sinker at 2-0, and it didn't sink at all.  Martin crushed it for a tie-breaking solo HR to get the 9th inning started off in style.

- After that it was great smallball on a hit-and-run with Ibanez where Jeter fisted the ball through the hole at second base, and heads up baserunning by Eduardo Nunez to score an insurance, and then Robinson Cano with a 2-run double dagger to left to make it a 6-2 Yankee lead.

- I liked going back to CC to finish it up after the 5-run barrage.  His stuff was still good, he's getting a full 4 days' rest after that start, and now Joe can really lean on his 'pen tonight if he has to knowing he's got a day of rest for them the next day.

- He threw some of his best sliders in the 9th too, but couldn't quite finish it off.  D-Rob handled that with a trio of heaters.

- Thinking about the scoring in the top of the 9th, it was about as diverse as it could have been.  Home run, RBI infield single, 2-run double, sac fly.  That's what a team of veteran hitters will do and they picked the right time of game to do it.

- Swish: 1-2, 1 RBI, 2 BB, 1 SF, 1 K.  Swish really looked like he was comfortable at the plate and seeing the ball well last night, a welcome sign for everybody familiar with his postseason track record.  The best part about his game last night was that he didn't try to do too much.  Literally took what the pitcher gave him in every plate appearance.

- Sabathia: 8.2 IP, 8 H, 2 ER, 1 BB, 7 K, W.  He just missed his first career postseason CG, but it was a great start by CC.  He threw 120 pitches, 80 of them strikes, and had a great fastball and slider all night.  Only about half of the hits off him were well-struck, and he broke a handful of bats.  He also mixed more changeups into the mix in the later innings, which almost helped bring the appearance of some zip back to his 4-seamer, and worked the righties and lefties in the Baltimore lineup equally well.  After his last 2 postseasons, this was as good as start as you could hope for from CC.

- Martin: 1-3, 1 HR, 1 R, 1 RBI, 1 BB, 3 LOB.  Hitting the game-winning HR in the playoffs tends to get you on the good side of the ledger.  Martin also did a great job behind the plate, calling CC's game and blocking his share of sliders.

Game 2 is tonight, and the preview will be coming up later today.  Pitching matchup is Andy Pettitte vs. Wei-Yin Chen.
Posted by Unknown at 7:00 AM