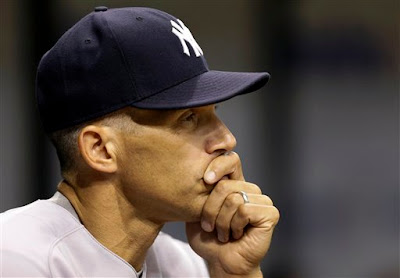 I touched on it in this morning's game recap, but I was quite surprised to read Joe Girardi's very blunt and straightforward comments on the Kevin Long "more bunting" suggestion from the night before.  Not because I don't partially agree with what Joe is saying; it's true that the Yankees, as presently constructed and even to a degree when their lineup is at full strength, aren't built to play the sac bunt game as a regular part of their offense.  My point of contention was with Joe's decision to be that blunt and in such open disagreement with his hitting coach during a time when the Yankees were already under fire for their poor play and lost division lead.  The timing of his comments just wasn't right.

To me, Girardi's words gave the impression that the coaching staff was not on the same page, something that's never good to have in a baseball clubhouse.  It's no secret that the team has been putrid offensively, and it's clear to anybody with functioning eyes that what they were doing wasn't working.  Something has to be done, and what Long suggested had merit.  Girardi shooting him down like that struck me as undermining Long's authority and expertise in the position he's paid to be in on Girardi's staff.  Of course Joe has the final say over everything as the manager, but in the midst of a "collapse" is just not the time to stir up a potentially juicy "Coach vs. Coach" with the NY media.

I also thought some of Girardi's comments were made under an incorrect, simplistic interpretation of what Long was saying.  There's no reason to think that Long was suggesting that Nick Swisher himself should be looking to bunt all the time with runners in scoring position.  My interpretation was that Long referenced the situation itself (2 on, nobody out) as the time that the Yankees should be looking to bunt if they had the chance, and with the way they have been hitting I would agree with that assessment.  They got that chance last night, with the right type of hitter to do it, and executed it perfectly.

It's easy for me to second and third guess and make judgements from the comfort of my computer chair, and I really don't think anybody was "wrong" in anything they said or did.  I just think it would have behooved Joe and Long to have a one-on-one discussion about changing or not changing the team's hitting strategy and come to an understanding before going to the media with their comments.  Both guys are partially right in what they said, and the situation should always dictate the strategy, so why not touch base before speaking into the tape recorders and not give the illusion that there's dissension amongst the coaching ranks.  The good ship Yankee doesn't need the seas beneath it to get any choppier than they already are.
Posted by Unknown at 11:14 AM