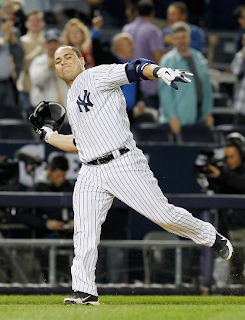 - Sabathia: 8 IP, 3 H, 0 R, 2 BB, 11 K, ND.  Was in line for the win after 8, and he definitely deserved to get it.  CC looked better than he has in months, showing mid-90s fastball velocity for most of the night and sporting a really nasty swing-and-miss slider.  There were no question that he was feeling good last night, and that's an encouraging sign for this rotation and this team.

- Ichiro: 2-3, 1 SB.  Got another 2 hits in a game where they were hard to come by, and made another solid defensive play in left early to help out his pitcher.  Ichiro is playing his best baseball of the season right now, simple as that.

6 in a row, 8 of 9, and 11 of 15.  It hasn't been as newsworthy as the team-wide slump was, but if the Yankees ever start to hit with any kind of consistency, they'll really be tough.  Ivan Nova looks to keep the winning streak rolling this afternoon against Travis Blackley.
Posted by Unknown at 5:31 AM