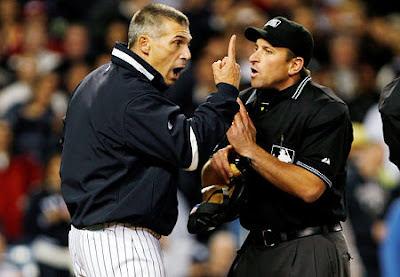 I mean, I know WHY he did it.  With the lineup a little unbalanced over the weekend with A-Rod out and Chavez nursing an ankle, and the Yankees facing a trio of right-handed pitchers, Joe wanted to maximize the lefty output in the lineup and keep his L/R staggering in play as much as possible.  But How important is that staggering really?  And with what Derek Jeter and Curtis Granderson have and haven't been doing lately in small sample sizes and over the course of the season, the timing of the switch just didn't make a whole lot of sense to me.

In Granderson, you have a guy who has continued to become an exclusive "3 True Outcomes" hitter this season.  On the one hand, the walks and power from the leadoff spot can be a bonus; you want your leadoff hitter to be a guy who gets on base, and C-Grand's BB rate of % and OBP for the season show that he's capable of doing that, and having the chance to have a 1-0 lead after 1 hitter has come to the plate is never a bad thing (unless you buy into the "too many home runs" meme, in which case you're an idiot).

But C-Grand's monthly splits show a trend towards the uglier side of the 3 true outcomes for him this season, and make the decision to move him to the leadoff spot now questionable.  Curtis' BB rate has steadily decreased from 15.8% in April to a season-low 9.4% in July, while his K rate has increased every month from April to July (24.8%, 26.0%, 27.0%, 34.0%).  This has naturally led to a monthly decrease in OBP (.380, .341, .325, .321).  These rates have bounced back in August's limited sample size, but the overall trends don't coincide with what a team is looking for from its leadoff hitter.

Jeter has actually bounced back in the OBP department after 2 lackluster months in May and June.  He posted a .375 OBP in July, albeit without the aid of many walks (2.7% BB rate), and has been on a hot streak over the past couple weeks with 16 hits in 45 plate appearances over his last 10 games.  Jeter's doing all his damage with his swing, so on paper it might make sense to move him down a spot and try to capitalize on his hot streak in run-scoring opportunities.  But Jeter is hitting just as many groundballs as ever (63.3% in July, 65.3% for the season) and that suggests that there could be some serious BABIP luck in play supporting his hot streak.

If that's the case, the Yankees run the risk of getting diminished returns from Jeter in the 2-spot when those groundballs start to find infielders' gloves.  If Granderson gets on base from the leadoff spot, Jeter is more likely to erase him with a double play if he's continuing to hit groundballs.  And if Granderson doesn't get on base, the Yankees still aren't sitting pretty with a heavy-GB hitter coming up in front of the heart of the order.  For reference, Jeter did hit 7 balls on the ground in this past weekend's series against Seattle.

This is not to suggest that going back to Jeter 1, Granderson 2 is the greatest solution in the world either.  Jeter could just as easily ground out to lead off the game and Curtis could just as easily strike out to set up the same none on/2 out scenario described above.  But that doesn't change the fact that there hasn't been much in either player's trends or contact splits to suggest that swapping them is a better strategy.  If anything, it probably ends up as a "six one, half-dozen the other" situation.

Personally, I'd rather see Jeter leading off and Granderson hitting 2nd if Joe is against moving Granderson down in the order, just so there's an increased chance of scoring more runs if Curtis achieves the greatest true outcome with Jeter on base.  This just seems like another case of Joe overmanaging the lineup, and to me it doesn't make much sense to do that when the lineup is already undermanned.
Posted by Unknown at 11:01 AM