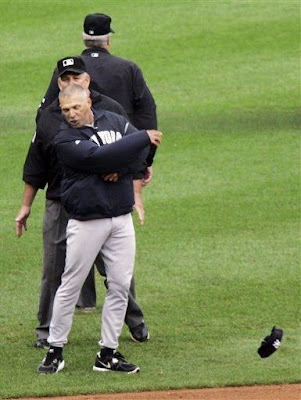 Why, you ask?  Because that series was just bizarre and it warrants more conversation about it, that's why.

- 25: The number of points that Eric Chavez's batting average went up in the 4 games.  That'll happen when you go 9-16 and are the only consistent source of offense for your team.

- 9: The number of infield singles the Tigers had in the series.  8 of them came in the last 2 games.  Prince Fielder had 2 of them.  That's just straight up ridiculous.

/D-Rob and Hiroki nod in agreement

- 8: The number of lineouts the Yankees had in the series.  Seriously, the BABIP gods were cursing the Yankees left and right in those 4 games.

- 4: The number of ejections of Yankee coaching personnel this season.  All of them have come against the Tigers.  (Got that one from Brian Hoch)

It was a frustrating start and an inspiring ending to the 4-game ordeal in Detroit.  I'm just glad it's over.
Posted by Unknown at 10:02 AM