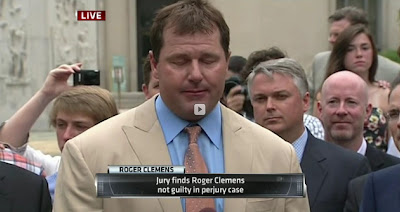 (Screen cap courtesy of ESPN.com)
Holy Christ! What the FUCK happened to Roger Clemens?!?!  Look at that fucking guy!  He looks terrible.  Hair all disheveled, ill-fitting suit hanging off his bloated body like he just walked into a Men's Warehouse that morning and bought it off the rack, and a big pudgy "Kirby's Dreamland"-looking head.  Dude looks like a bag of smashed assholes that got run over by the entire Rose Bowl Parade.  That doesn't even look like Roger Clemens.  It looks like John Daly's stunt double.  Quick, somebody get him a HGH injection B12 shot, stat!
This is a guy that made north of $150 million in his baseball career, and that's not counting whatever he made off of endorsements and appearance fees and whatever else.  He looked like a complete schmuck when he walked out of the courthouse yesterday.  Just a complete bumbling mass of broken humanity, and in a way it was perfectly fitting.  His time in the public eye is finally over, and there's nothing more he can do to extend it.  Now he has to do what every other professional athlete who gets old does and fade into bolivian where he belongs. 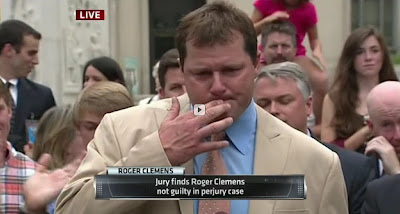 (Also courtesy of ESPN.com)
So go ahead and cry your crocodile tears, you fat phony.  You won't get any sympathy from me, and I'd like to think that you won't get much from most other intelligent baseball and sports fans either.  If you need a shoulder to cry on, go find Mindy McCready's dumpy ass or Suzyn Waldman.  Just get the fuck off my TV and get out of my sight.  You aren't going to make the Hall of Fame and you shouldn't.  Not because you did steroids and not because you did or didn't lie about it under oath, but because you're a selfish piece of human garbage who bled the game of baseball and its fans dry for your own personal gain.  I'm glad that my final image of you is going to be the one from yesterday where your outward appearance was finally as ugly as the man you really are on the inside.
Good riddance.﻿
Posted by Unknown at 12:30 PM

How do you really feel?