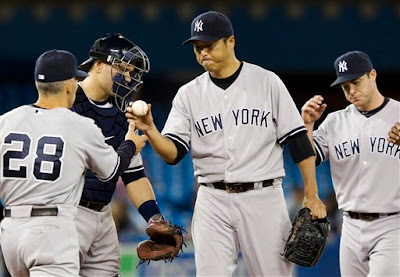 (Cue the "The Price Is Right" loser horn.  Courtesy of The AP)

Kyle Drabek had faced the Yankees 4 times prior to last night's game.  In those 4 outings, he allowed a combined 18 hits, 10 walks, and 12 earned runs in just 15.2 innings pitched.  He also came into last night's game with a 5.49 K/9 this season, something that plays right into the hands of the Yankees and their patient offensive approach.  If anything could shake them out of the funk they were in on Tuesday night, it should have been Drabek.

- Something about not being able to put hitters away with 2 strikes must be appealing to the Yankee starters, because they continue to do it.  After getting ahead 1-2 and coming high and tight with a fastball, Hiroki Kuroda hung a slider to J.P. Arencibia in the 2nd and then watched it sail over the center field fence for a 2-0 Toronto lead.

- Same thing with finishing innings with 2 outs.  Kuroda got the first 2 outs of the 3rd inning, then gave up double-walk-HR on 10 pitches to make it 5-0 Jays.  The stuff was there; Kuroda struck out 4 in the first 3 innings.  But when he missed, he missed bad.

- Much like CC on Tuesday night, Kuroda just didn't have anything working last night.  He hung a couple of sinkers bad, missed with his slider and curveball, and couldn't put hitters away.  He gave up another run in the 4th and another in the 5th on a Jose Bautista HR and the rout was on.

- Kuroda left after giving up a leadoff single in the 6th, and Clay Rapada managed to work into the 7th.  He gave up a HR to Kelly Johnson to extend the lead and Cody Eppley came on as the sacrificial lamb to finish the game.

- There was no offense last night, so no need to write about it.  The Yankees  did score 1 run, but it was an accident.

When I was 22, I was pretending I knew what I was supposed to be doing at my new job over in Germany and writing really shitty half-blogs on Facebook about the CC Sabathia/Mark Teixeira signings.  Ryan McDonagh is 22 and he's probably the best defenseman in the NHL playoffs right now.  He plays great angles, times his stick checks perfectly, always seems to know when to play position and when to play body, handles the puck incredibly well, has a great sense of when to jump into a play offensively, and has tremendous heart and gigantic balls when it comes to shot blocking.

There weren't many Rangers who played a good game last night.  McDonagh played a GREAT game.

Kuroda: 5+ IP, 8 H, 7 ER, 2 BB, 6 K, 3 HR, L.  There's not much good stuff that can be said about Kuroda's outing last night or his start to his Yankee career.  His calling cards were supposed to be command and groundballs.  I haven't seen a lot of either in the first 6 weeks.

There was literally nobody who played for the Yankees last night who could say he played a good game.  The offense was non-existent, even more so than it was against Millwood a few days ago.  They drew a few walks, but against a pitcher like Drabek who gives them up with regularity, that's hardly something to write home about.  The guy barely threw more strikes than balls and the Yankee hitters made him look like he was fucking Roy Halladay.  Sooner or later, the excuses and cookie-cutter comments to the media need to stop.  Somebody get a fucking hit!

Kuroda didn't pitch well, Rapada gave up a run, and no offense to Cody Eppley, but dude, you're Cody Eppley and you're only in the game to save the rest of the arms in the bullpen that are actually useful in winnable games.  So excuse me if I'm not standing and applauding for you not allowing any runs.

They're only 3.5 games out right now, which makes this consistent inconsistency slightly less maddening, but the Yankees flat out aren't playing good baseball.  Yes a lot of guys are injured right now, but most of them are pitchers.  Their presence or lack thereof shouldn't be an excuse for the lineup not producing, guys making bad decisions on the basepaths, or guys making sloppy plays in the field.  This has been 2 games in a row of this crap.  It needs to stop.

The final game of this 2-game series is tonight.  The recently resurgent Phil Hughes is back on the mound for the Yanks, looking to build off of what was his best start to date the last time out.  Opposing him will be Drew Hutchison, who I'm not embarrassed to admit I've never heard of.  Like Drabek, his statistical profile suggests the Yankees should feast on him, but we all saw how last night went for the offense so who knows.
Posted by Unknown at 6:25 AM