2012 Storylines: Elder Statesmen Of The Lineup 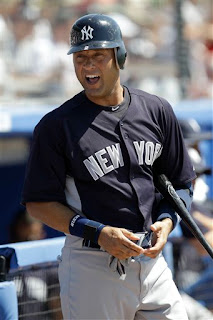 When you're operating with the biggest payroll in baseball, your team should be potent offensively.  The Yankees are just that and have been for some time now.  They're coming off a 2011 season that saw them rank 1st in total team HR, 2nd in runs scored, 3rd in wOBA, and tied for 2nd in wRC+, and with almost the entire gang who collectively racked up those numbers back for 2012 they're looking at more of the same.  In looking at the projected starting lineup, it's expected that the group of Robinson Cano, Curtis Granderson, Nick Swisher, Russell Martin, and Brett Gardner will produce in a fashion similar to their 2011 output.  It's not a coincidence that those gentlemen are the younger members of the lineup, still in their physical primes.  The wild cards when predicting just how good the Yankee offense will be in 2012 are the older group of everyday players, specifically the infield trio of Mark Teixeira, Derek Jeter, and Alex Rodriguez.  They're all coming off of interesting 2011 seasons to say the least, and so far have had mixed results in ST, making it difficult to pinpoint how effective they'll be once the regular season grind starts.

Jeter and A-Rod, at 37 and 36 respectively, are the resident "old guys" of the Yankees lineup and clearly the ones most affected by age-related decline.  Jeter looked damn near dead in the water after the 2nd half of 2010 and the first half of 2011, but rebounded after his DL stint to hit .331/.384/.447 from July 4 on.  I've already discussed what Jeter needs to do this season to try to keep the momentum from his 2011 2nd half going, but results have been mixed in ST as he's been hitting a lot of balls on the ground and has been out for almost a week with a calf strain.  The Horse, on the other hoof, has looked fantastic this spring, both physically and from a baseball perspective.  He's got 7 hits in 24 AB, 4 of them for extra bases, and hasn't reported any physical issues with the knee or hip while pushing himself hard on the field and on the basepaths.  130-140 games of a healthy A-Rod will be a huge boost to the Yankees, especially if he can produce the way we know he's capable of.

Teix isn't quite as long in the tooth as his left side counterparts, and is still technically in his prime at 32, but he's coming off a down year that's not attributable to age-related decline or injury, his third straight year of offensive decline since becoming a Yankee.  With five more years left on his deal, the Yankees need him to right the ship and correct his issues from the left side of the plate.  Teix reportedly worked on his left-handed hitting in the offseason, shed some weight, and has been saying and doing all the right things in camp (including not trying to bunt against the shift).  He's also had mixed results at the plate, with 5 hits in 21 AB and little to no power, but he's drawn 5 walks and gone the other way a couple times.  The lack of power can likely be chalked up to him making a conscious effort to focus on his approach from the left side more than driving the ball, so there's really no cause for concern yet.

They aren't infielders, but the tag team tandem of Raul Ibanez and Andruw Jones are expected to carry the bulk of the load from the DH spot in the lineup this year, and at 39 and 34 respectively they aren't young and haven't exactly been filling anybody with confidence with their early spring performances.  They're currently a combined 6-55 this spring with only 1 XBH and 13 K.  Ibanez has been particularly ugly to watch as neither his timing nor his swing look very good and he offers very little value defensively if forced into outfield duty.  Jones had offseason knee surgery and also got into better shape before camp to attempt to be a bigger contributor in 2012, but both need to produce more than they have so far once the games start to count or the Yankees may be fishing for a new DH at the trade deadline.

If none of these guys improve upon their 2011 offensive output the Yankees will still be a very good offensive team.  But they can be a force with a pair of bounce-back seasons from A-Rod and Teix in the middle of the lineup, and Jeter maintaining a production level above replacement level at the top of the order would be gravy.  If, however, the downward trend continues for this group, things could start to get dicey for the Yankees as they move to the latter parts of the season and further into the future.  Jeter, The Horse, and Teix are all under contract for the next handful of seasons at a hefty price and will become even bigger anchors to the payroll and lineup if they don't produce, and Ibanez and Jones will have people pining for The Jesus if they continue to scuffle.
Posted by Unknown at 1:10 PM