Kate Upton Is A Yankee Fan?

It certainly appears so now, doesn't it?  Which means I just became a Kate Upton fan. 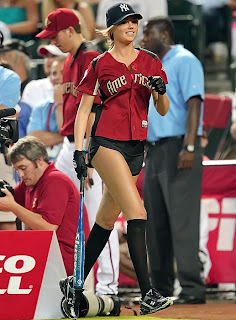 HELLOOOOOOOOOOOOOO!!!!!!!!!
Side note, what's everybody thinking about Robbie's chances in the Derby tonight?  He's got the type of smooth, easy swing that I think can translate well to an event like this.  He won't tire himself out, and if he gets in a groove, watch out.  I also don't buy into the theory of him messing his swing up by participating.  Watch him during games, the swing never changes.  It's his problem of swinging too much that gets him in trouble.  I honestly have no clue how these new team rules work, so I don't know if he can actually win or not, but take it to the bank that Robbie Cano is putting up double digits in his round tonight.

Alright, enough of my half-hearted HR Derby analysis.  Back to Kate Upton: 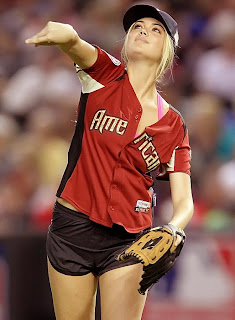